When biologist Florence Aghomo comes across a red colobus monkey in the wild, she briefly loses all sense of space and time, before coming to grips that what she is seeing before her is, indeed, reality, and remembering to take down notes about what she is seeing. It’s not just that red colobus monkeys are mainland Africa’s most threatened non-human primate, but that Aghomo is among the monkeys’ biggest champions. As the red colobus conservation coordinator for the IUCN SSC Primate Specialist Group and African Primatological Society, Aghomo is committed to helping build and lead a network of conservationists across the range countries of the 18 forms of red colobus, ultimately with the aim of moving them all from some level of threat of extinction to safe in the wild.

We had a chance to connect with Aghomo about her journey falling in love with red colobus, what makes the animals so special, and what she and others are doing to help safeguard them.

Q. How did you get interested in red colobus monkeys specifically?

A. It all started in 2010, when I was earning my bachelor of science in forestry. Driven by my enthusiasm for and dedication to community conservation, I grew interest in and got initiated into the world of wildlife conservation under the Volkswagen Foundation-funded project called “Managing forest wildlife for human livelihoods in the Korup-Oban hills region, West-Central Africa.” Here, when conducting ethnozoological studies, wildlife surveys and livelihood assessments around key protected areas in one of the key hotspots of biodiversity in Africa, the Korup rainforest, I was moved by the ways local communities perceived wildlife in general and our closest siblings, primates, in particular. 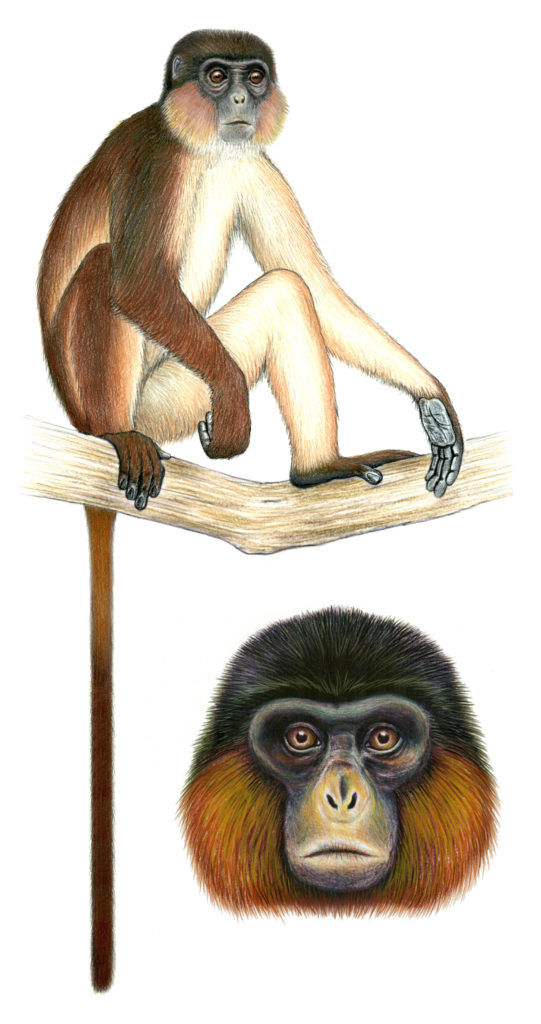 When discussing on the specificities of each species, listening to how the communities reproduce species’ sounds and narrate the values of the primates to them, I got motivated to learn more about the species and their habitats, despite the physical challenges. So I gathered as much data as possible on all the species known to occur—and valued by the communities—in this hotspot and started documenting them through papers and presentations in national and international events.

In late 2011, I started raising more awareness of the threatened group of primates. Certain community practices, traditional ecological knowledge and beliefs, intrinsically linked to the existence of primates, were disappearing among the younger generations, who were the main hunters of the villages. Hunting of these once-cherished primates was a growing issue and was leading to the scarcity of species like the Preuss’s Red Colobus (Piliocolobus preussi) and Red-Capped Mangabays (Cercocebus torquatus), among others. So at that time, together with a group of young student researchers, we focused our attention in 2012 to addressing all underlying conservation issues affecting both primates, specifically in the Korup region. We grounded our research in the information gaps in the literature. 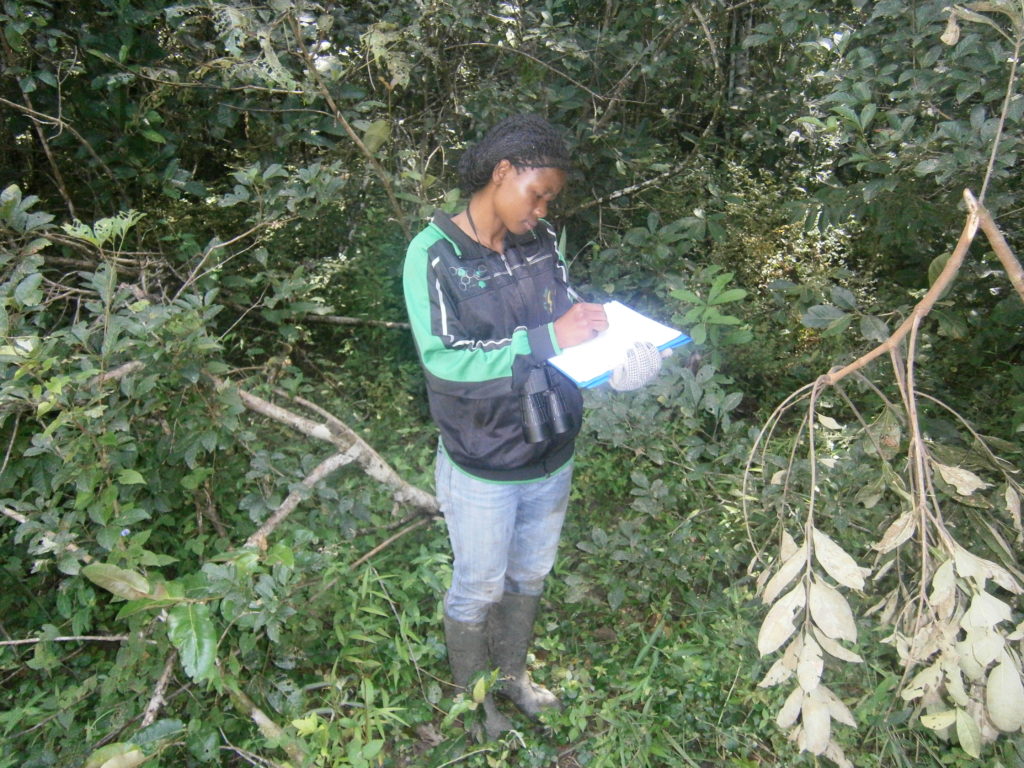 Q. What is it like to see a red colobus monkey in the wild?

A. It is a unique event, one that keeps me astonished for minutes. I completely forget about all the physical pains and days of efforts it took. Once I realize it’s real, observing them simultaneously triggers emotional, cognitive, and environmental dimensions of learning and raises my hopes for their future.

Q. Do you have a favorite moment from your time in the field with red colobus monkeys? Tell us about it.

A. The most memorable moment that stays with me whenever I’m in the forest, is when I see a red colobus or a group of the monkeys. I just sit and watch. In this very rare moment, I forget that I have to record data and rapidly get emotionally overwhelmed and lost in my thoughts for a couple of minutes until when I recognize that it is actually reality. It’s only after some time that I start thinking about my datasheets and describing what happened. This kind of moment was particularly powerful in 2012, when I observed Preuss’s Red Colobus in Korup National Park, though it lasted just a couple of minutes. 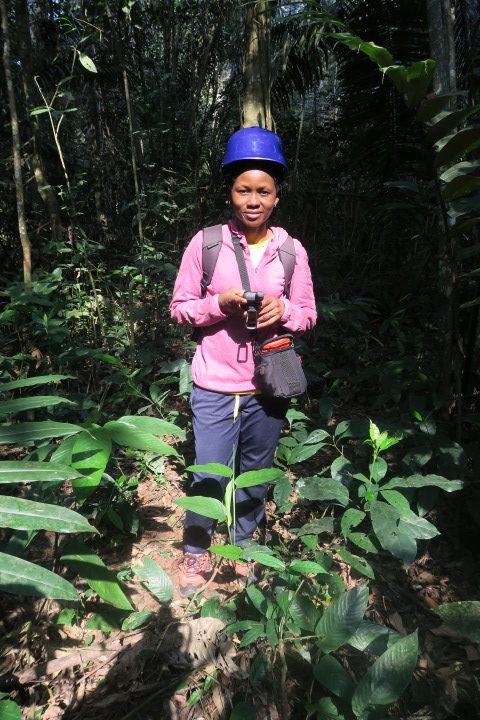 Today, 18 taxa of red colobus species have been recorded across the African continent. They are so special because they are very beautiful, unique, and perfect indicators of ecosystem health or habitat change since they are usually the first group of primates to leave a habitat when any disturbances or degradation occur. Moreover, their diversity reflects the various bioregions of the African forested areas at large.

Q. Why is the work of the Red Colobus Conservation Network so important?

A. The Red Colobus Conservation Network (RCCN) is a community of volunteer individuals, organizations and institutions, working to upgrade the conservation status of red colobus monkeys across their range. Driven by a common vision, we help bring efforts and conservation actions across the species’ range. The network is mobilizing people to build a solid foundation that will support and ensure success in the implementation of the Red Colobus Conservation Action Plan (ReCAP), the internationally adopted operational document guiding red colobus conservation efforts.

Q. What do we stand to lose if we lose red colobus monkeys?

A. If we lose red colobus monkeys, then we are sure to lose forest habitats and other species, and to disrupt ecological processes. The ecosystem services provided by this unique group of primates will be lost and local communities in particular and humanity at large will lose their precious heritage, identity, and values derived from them. We will also lose many years of conservation efforts that may threaten the conservation movement/engagement of individuals working to see the species strive in nature. 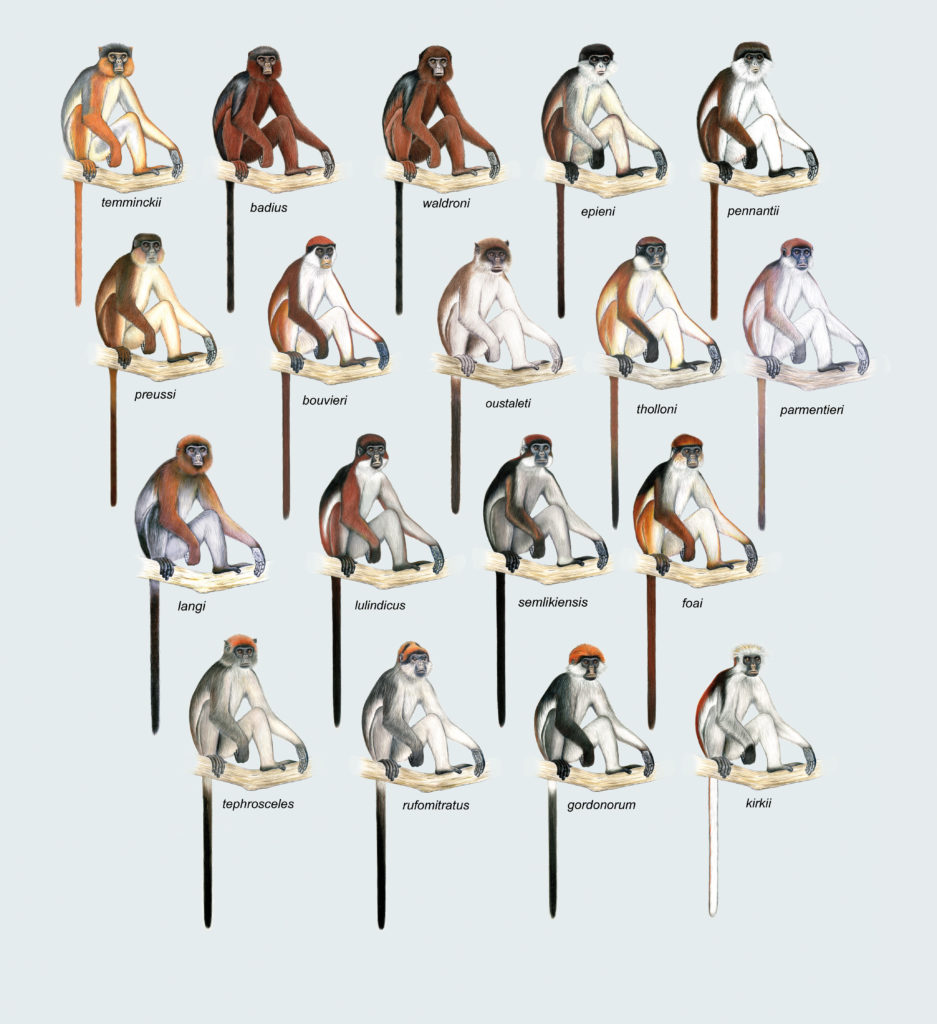 All 18 forms of red colobus monkeys. (Illustration by Stephen Nash)

Q. What does success look like for the Red Colobus Conservation Network?

A. To see red colobus monkeys and other species that share their home thriving in the wild and to ensure that the species is recognized locally, regionally, nationally and internationally as a flagship species by an ever-growing group of individuals dedicated to conservation. Success will also be measured by the continuous mobilization of all the actors collectively combining efforts to improve the status of the species and its habitats.

Q. What makes it so difficult to study some species of red colobus? Why do scientists know relatively little about some of the species?

A. Red colobus monkeys are difficult to study because of the combination of their relative scarcity and the general inaccessibility of forest habitats/areas where red colobus monkeys can be found. In effect, their low abundance caused by hunting pressures reported over the years underscores the necessity of seeing the species in the wild. Moreover, hunting pressures have induced behavioural changes in these monkeys, which keeps them alert and always ready to escape at the hint of any strange event in their environment. Accessibility to their habitats even makes things more challenging. For example, in the Congo basin forest where I am working, their habitats are difficult to identify in vast forest areas and so it is easy to miss the animals during surveys using sampling approaches. Even when they are suspected to be found in a specific portion of the forest, accessibility to the area requires huge efforts given the set of obstacles we face to find them (bad roads, difficult terrain, hydrology, socio-political situation etc.). 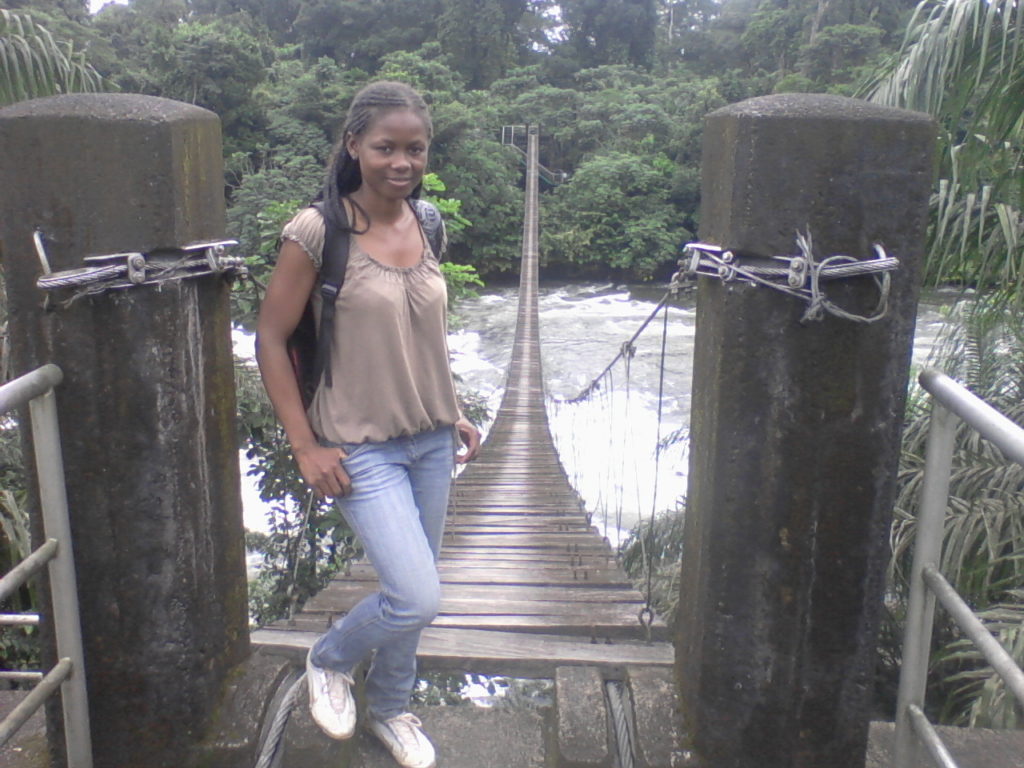 If scientists know little about some of the species, first and foremost, I think it is because there has been lack of interest in the species, as most research efforts have been dedicated over the years to charismatic species like Gorilla, Chimpanzees etc. In addition, funding allocated to research and conservation of the species has been very low and local governments' interest even lower.

Q. What would the rediscovery of Miss Waldron’s Red Colobus, one of GWC’s 25 most wanted lost species, mean for the conservation of red colobus more generally?

A. The status of Miss Waldron's Red Colobus is worrying. Declaring it Extinct is challenging, so researchers and conservationists are multiplying efforts to find at least a sign that indicates its presence in the wild. So I think rediscovering the species will be a sign of hope that not all is lost and the gateway to boosting conservation attention and efforts across the range of all red colobus species on the continent. For the communities that have known and lived with the species, it would be a rediscovery of their heritage.

Q. Are you hopeful for the future of red colobus monkeys? Why or why not?

A. Of course I am very hopeful. This is demonstrated by my motivation and my total commitment to efforts aimed at reversing the current narrative about the status of the species.