Between The Stripes Part I: Discovery Of A Tiger-Like Rabbit

In the mid-1990s, the small landlocked country of Laos was a biological blank spot on the world map. The country had only recently opened its borders after years of isolation following the second Indochina conflict and then the struggles of installing a new communist government. Laos held vast unbroken tracts of tropical forest—but just what was found inside these jungles was anyone’s guess. And so a small cadre of biologists went there to find out.

The stakes were high: just three years earlier the Saola (Pseudoryx nghetinhensis), a large forest-dwelling species of wild cattle, had been discovered in the Annamites mountain range that borders Vietnam and Laos. The discovery of such a large unknown mammal had sent shock waves through the biological community worldwide. Scientists wondered what other species new to science might be found here. For an intrepid field biologist looking to make a name for him or herself, the Annamites was the place to be. It would take a special type of person to penetrate the Wild West-like frontier towns on the Laos-Vietnam border—but the payoff could be big. 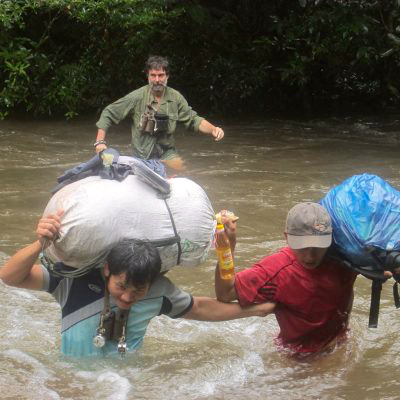 Rob Timmins, in the background, was the first to reveal the Annamite Striped Rabbit’s existence to the world. (Photo courtesy of the Saola Working Group)

Rob Timmins fit the bill. An Englishman with an accent as thick as London fog, he is equal parts naturalist and 19th century explorer. Rob had stumbled into Laos in the early ‘90s and was struck by the high levels of biodiversity there and the fact that so little was known about the area. And so he stuck around. Driven by an almost pathological curiosity, and gifted with an ecological intuition, he began exploring the remote forests and villages along the Annamites cordillera, trying to untangle the mysteries of one of the world’s oldest and least-explored rainforests.

The town he visited in eastern Laos was like any number of small villages scattered around rural backwaters of the country: dusty streets lined with sleepy stores, barefoot children slow-peddling on rusty bicycles, disco music playing in a distant corner where the men gathered to drink beer and while away the sweltering afternoon heat. It was here that Rob ran his usual research rounds of the local market. The Lao version of the local grocery store is usually found in the town center, and it was the first place to visit.

The aesthetic evil of an aside is needed here: most people picture biological discoveries as being made by pith-helmet-wearing butterfly-net-wielding explorers who strike a eureka moment while wandering through remote rainforests. And I’m sure that happens on occasion. But in the Annamites, discoveries are more often made in the local bushmeat markets—the places where the local hunters bring their products. It is here that the forest’s biodiversity is most completely, if somewhat gruesomely, displayed. The Saola, after all, was discovered when a team of biologists found strange-looking trophy horns in the homes of local people. And so the local market is not a place to miss.

Stuffed in-between the usual deer and wild pig parts—a tusk protruding here, bloated intestines spilling there—were a pair of unusual-looking animals. They were rabbits, that much was clear, but they didn’t look like anything that was supposed to exist in this area. The ears and legs were short—almost two-sizes-too-small. But the most striking feature was the pelage pattern: the base coat was buff tan, with black-brown stripes racing across the hindquarters, ending in a rust-colored rump. It resembled the Sumatran-striped Rabbit (Nesolagus netscheri), a small forest-dwelling lagomorph that, as its name suggests, is only found on Indonesia’s largest island. But Sumatra was more than 2,000 miles away. 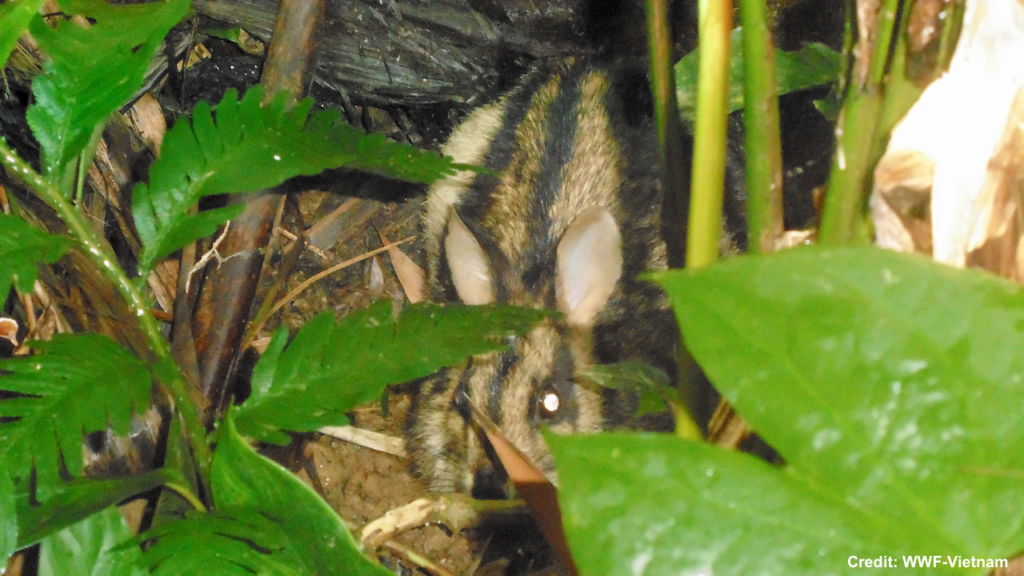 The Annamite Striped Rabbit, a species discovered in the Annamite Mountains in 1995. (Photo by WWF-Vietnam)

Was this confirmation that the Sumatran Rabbit also existed in Laos? Or was this a closely related but new species endemic to the Annamites? Morphological data suggested the latter, but to investigate further, researchers looked beyond morphology into the striped rabbit’s DNA. Rob sent tissue samples to a geneticist at the University of East Anglia, hoping that the amino acids would spill their secrets.

The results confirmed the hunch: the striped rabbit was indeed a new species, having diverged from its Sumatran cousin approximately 8 million years ago. While the geneticists were writing up their results, and Rob was gathering additional data on the new find, a team of Russian scientists came across other market specimens, this time in neighboring Vietnam, and rushed to describe the new species. Rob and company had been scooped. But, in acknowledgement of Rob’s getting-there-first, they named the species Nesolagus timminsi: Timmins’s Rabbit. And so the Annamite Striped Rabbit will always be linked to the British biologist who first revealed its existence to the outside world. 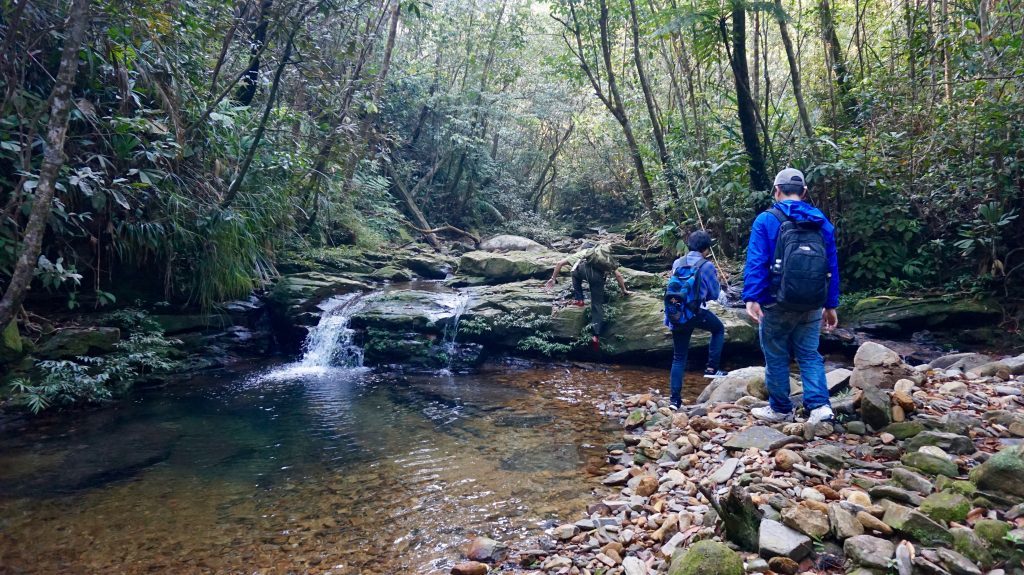 The world’s ark was now one species heavier. But discovery was only the beginning of the story for the Annamit Striped Rabbit. Nothing was known about its basic ecology or distribution within the Annamites range. And in a region where poaching is rampant, the more pressing question was: How threatened is it? Could we be looking at the eclipse of a recently discovered mammal species? And so one of my primary goals while working in Vietnam and Laos was to answer these questions.

Support GWC’s efforts to stem the tide of poaching in the Annamite Mountains–one of the primary threats to the rabbit–through a campaign with GreaterGood.org: donate today.