This Is How You Play Matchmaker To A Frog

There is nothing in Teresa Camacho Badani’s background in biology that suggests her career would lead her today to play cupid, dating coach and couples therapist combined. And yet as the amphibian aficionado gets ready to lead eight expeditions into Bolivia’s wilderness starting next month, she is preparing to play all of these roles—for a bachelor frog named Romeo.

But first her team needs to find a Juliet (or two). Romeo is a Sehuencas Water Frog, a fully aquatic frog once abundant in small streams and rivers in the cloud forests of Bolivia. When biologists brought Romeo into captivity 10 years ago, they knew his species might be in trouble, but they didn’t know they wouldn’t find any other individuals after that. Poor Romeo has since been alone in an aquarium at the Museo de Historia Natural Alcide d’Orbigny.

Camacho Badani, with our help and the help of Romeo’s fans around the world who have generously supported the expeditions, plans to change his fate by finding him a mate and other individual Sehuencas Water Frogs. The goal is to start a conservation breeding center that will save the species from extinction.

How do you find a frog that never comes out of the water and is so rare nobody has seen one in more than 10 years? By never stopping long enough to dry off, Camacho Badani says.

“We’ll be walking inside the rivers where Sehuencas Water Frogs were once common, turning over rocks and looking for frogs on the bottom of the river,” says Camacho Badani, who is the head of herpetology at the Museo de Historia Natural Alcide d’Orbigny in Cochabamba. “We used to find six or seven at a time. They’re hard to spot if you’ve never seen one before in the wild, but I’m hoping to find as many individuals as we did during our field trips more than 10 years ago.”

The team—which will consist of Camacho Badani, another biologist, a veterinarian and a local guide—will be targeting sites with historical records of the species, starting with La Siberia, the last place the species was registered and the location Camacho Badani says she is most excited to check out. Each expedition will be about six days long. They’ll bring with them camping equipment, flashlights, GPS, camera equipment and, of course, rubber boots and raincoats. 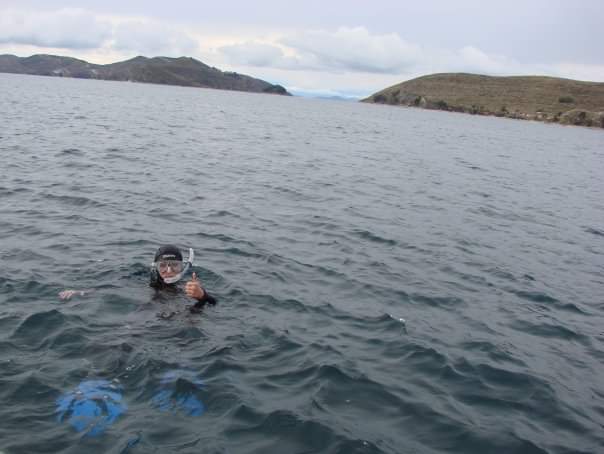 Teresa in the field looking for the Titicaca Water Frog, a sister species to the Sehuencas Water Frog that is also Critically Endangered and found only in Bolivia. (Photo courtesy of Teresa Camacho Badani)

They will also bring with them material to collect and transport the frogs back to the museum when they find them. The animals will be kept in wet containers inside a cooler and will go into quarantine before Romeo has a chance to say hello. Then they’ll be moved, with Romeo, his dates, and his friends, to a new shipping-container-turned-rescue-pod just for this species.

“Having seen this species once before in the wild, and watching Romeo hold on for all these years, I am filled with hope and happiness to lead these expeditions,” Camacho Badani says. “Romeo represents a charismatic and unique species that is a symbol of conservation. The species represents what has happened to amphibians over the years as the result of habitat loss, invasive species, disease and other threats.” 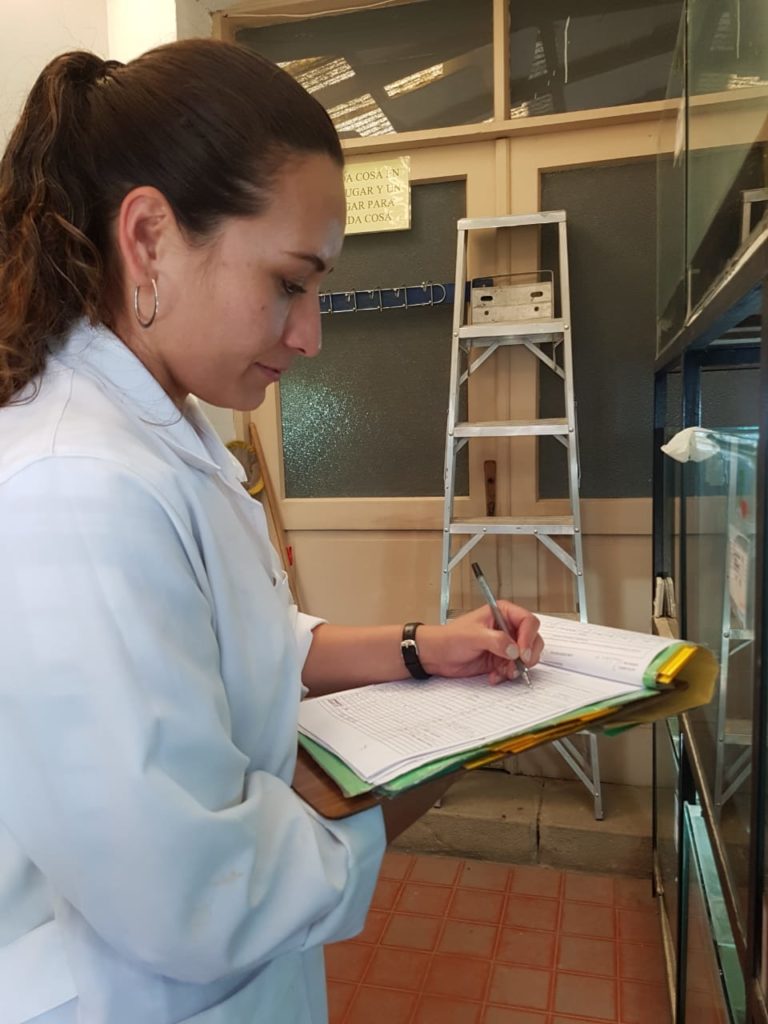 Teresa in the lab. (Photo courtesy of Teresa Camacho Badani)

In fact, the Sehuencas Water Frog isn’t the only missing water frog species the team will be trying to find. Two other species—the Siberia Water Frog (Telmatobius sibiricus) and Telmatobius edaphonastes—have been missing for even longer. Camacho Badani says she has never seen either of these species in the wild, only in collections, and is eager to see what the team might find.

It is Camacho Badani’s own love for amphibians that is spurring her hope for Romeo and other Bolivian species that have come under threat. Camacho Badani says she has loved amphibians since she was young and spent time finding threatened frog species. The first time she found a water frog in the field, it was actually a Sehuencas Water Frog.

For Camacho Badani’s Bachelor thesis, she documented the population status of two amphibian species found only in Bolivia, the Quechua Toad (Rhinella quechua), which lives in forests and in the same streams as the Sehuencas Water Frog, and the Small Whistling Toad (Microkayla iatamasi). She was an intern with the local Zoo Amaru in the city of Cuenca, Ecuador. The internship was funded through a Disney Wildlife Conservation Fund grant and the Philadelphia Zoo’s Amphibian Conservation Program. During that work, she focused on a conservation program for Critically Endangered harlequin toads, marsupial frogs and poison frogs. She also helped gather data on the life histories of these species and several others, and monitor the last remaining populations of the Green Cajas Harlequin Toad (Atelopus exiguus). 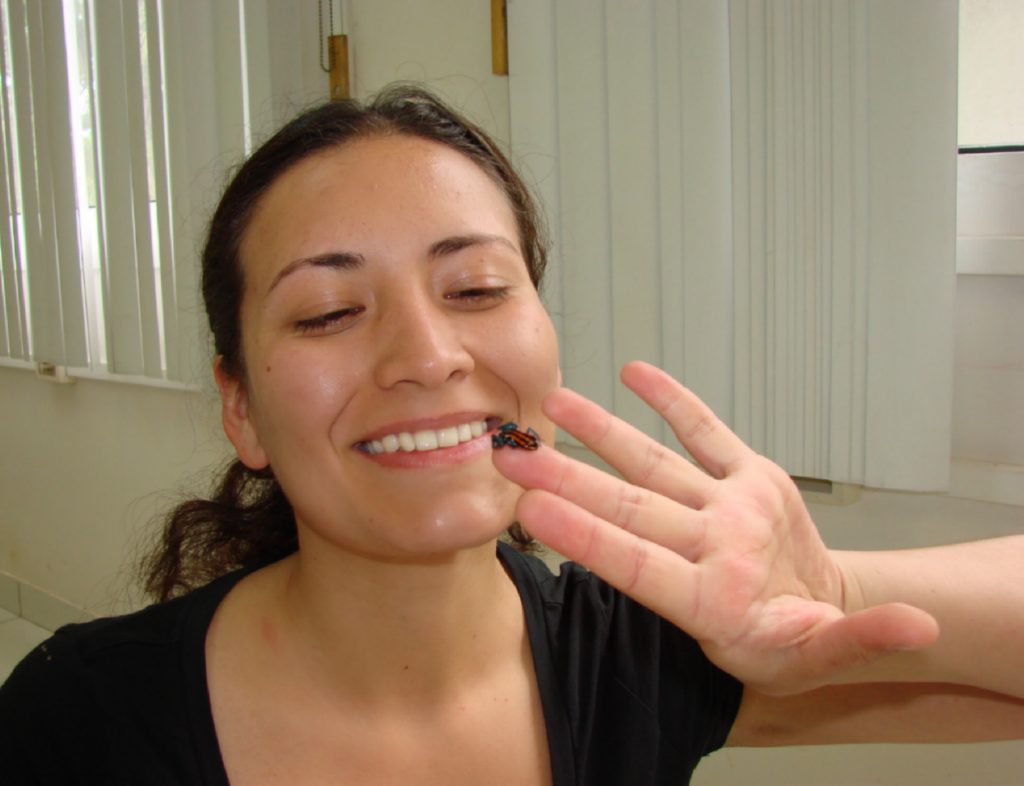 She studied amphibian phylogenetics and conservation for her master’s degree at Pontificia Universidad Católica del Ecuador. And today, in addition to heading up the museum’s herpetology department, Camacho Badani leads the museum´s K’ayra Center for Research and Conservation of Threatened Amphibians of Bolivia, where Romeo and other threatened frogs live.

“Amphibians are such charismatic animals and we know so little about them, especially in Bolivia,” Camacho Badani says. “They vary so much in color and shapes, and their behavior can be so different from one species to another. They truly are whimsical animals that capture our imagination. Romeo certainly has done so, and now we hope to give him—and his species—a happily ever after.”

Check back here for expedition updates.