Confronting The Ghost Of The Saola

After six hours of hiking through the jungle-covered mountains of central Vietnam I had had it. In spades. I was on my last legs, and I let out an audible whoop of joy when we finally came to our destination. We stumbled into the remote Katu village of Aur and I let my backpack fall—thud!—to the dirt floor of the nearest hut. I paused to catch my breath and took in my surroundings. The village looked like a color-version reprint of the grainy black-and-white Katu villages photographs I had seen in old French-era exploration books: it was as if the village and its people were caught in a time vacuum.

And in many ways they were: life hadn’t changed much in this mountain village since the time of the Vietnam war. Or the time of the French. Or from before the colonial era, for that matter. I sat for several minutes staring at the scene: straw-thatched huts serried around an open earthen courtyard where children were running, laughing, playing in the evening twilight. I was lost in the simplicity of it all. I smiled. Then I felt a hand clap down onto my shoulder. I looked up: it was the village headman, Mr. Ren, who I knew from previous expeditions to this area. He invited me in to his hut to drink rice wine, which I gladly accepted. Nothing eases the muscle aches of fieldwork like a spot of Katu liquid painkiller and hospitality—both of which seem bottomless. 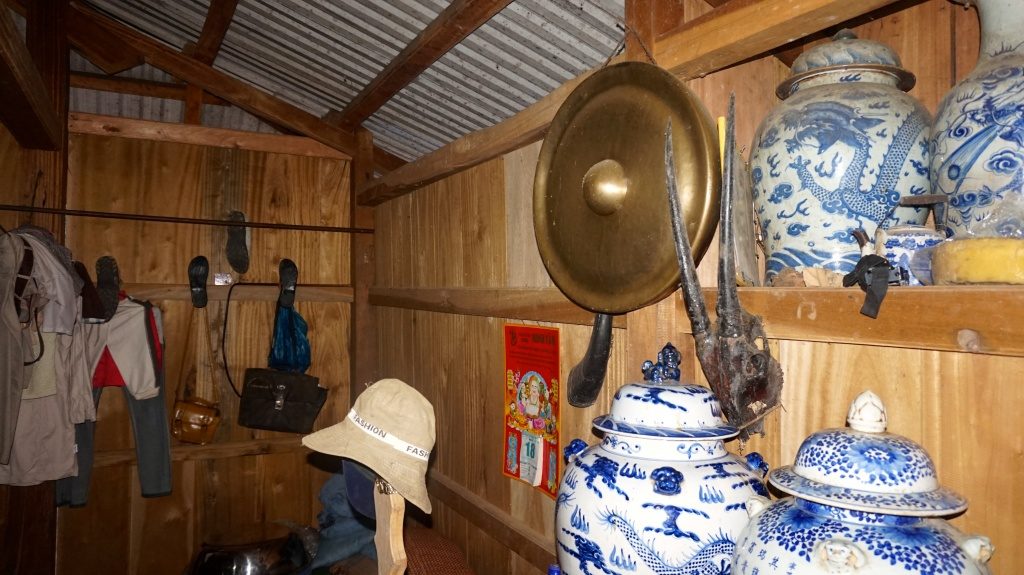 After an hour of eating and drinking and talking, we got ready to turn in for the night. But before we did I had enough courage (perhaps from the rice wine?) to ask my host a somewhat bold question: Did the village have Saola horns? And if so, could I see them? The Katu people, who are traditional hunters of these jungles, often keep the skulls of animals they kill as spiritual relics, displaying them in prominent places in their huts. I get the impression that it’s slightly taboo for an outsider to go poking around these relics. But I couldn’t resist: as a self-proclaimed Saola fanatic, I had to know if there were horns here. Mr. Ren’s face, sun-stained the color of tea and lined with a maze of wrinkles, broke into a wide grin. Yes, he said, there were Saola skulls in the village. And yes, he chuckled, he would let me see them. With a slightly wobbled walk, partly from the rice wine and partly from pure excitement, I followed him into a nearby hut. There, on either side of the central alter, piled with hand-painted blue and white ceremonial jars, were a pair of Saola skulls: physical proof of an animal that I had traveled halfway around the world to search for. An animal that, to many, has become more legend than reality. A creature so mysterious some call it “the Asian unicorn.” One of the rarest and most elusive mammals on the planet.

It was as if I were face-to-face with a ghost.

In awe, I felt the long, tapering horns, fingered the hollow eye sockets, caressed the well-worn ruminant teeth. And my mind jumped back 20 years to the time of the Saola’s scientific discovery: it was in a situation much like this that the Saola first came to light to the outside world. Traveling in north-central Vietnam in 1992, shortly after the country opened up to Westerners, a joint team of Vietnamese and American biologists had visited ethnic minority villages near Vu Quang National Park. There they examined the trophy skulls of animals hunted from the surrounding area. Among the usual set of deer, pig, and serow skulls was an unusual set of horns. The horns were almost a meter long, slightly backward pointing, midnight-black—and didn’t belong to any animal known to science. A new species was soon proclaimed: Pseudoryx nghetinhensis, which villagers called the Saola (the word means “spinning-wheel-post-horn”). The species was unlike any large mammal known: It appeared to be neither goat nor antelope but rather something in-between. Genetic analysis later indicated that it is actually an evolutionarily primitive kind of wild cattle, related to types of jungle-dwelling wild buffalo, like the tamaraw and anoa. But it was still something completely different than anything science had come across before, so unique that it merited its own genus (Pseudoryx means “false oryx” because the Saola superficially resembles the long-horned antelopes of Africa and the Arabian peninsula). Put simply: There was no other animal like it known to man. 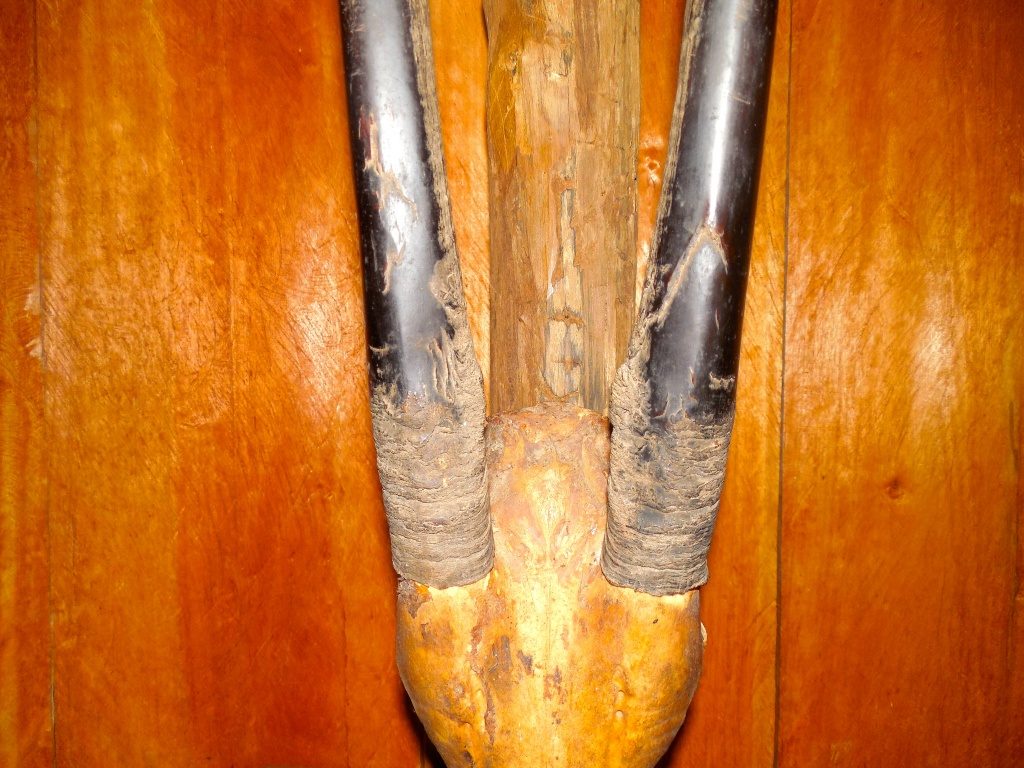 It was soon time to go to turn in for the night. I trudged back to our sleeping hut, my head spinning with stories of Saola and other biological rarities believed to haunt these remote jungles. I had, of course, arrived about two decades too late to “discover” the Saola. But, I wondered, as the left-brained biologist in me took over, maybe the Saola trophies that I had just seen give us other useful information. I remembered that one of the problems with using leeches and other blood-sucking sources of DNA to detect rare animals like Saola was the fact that we didn’t have genetic sequences from Saola from this part of Vietnam: all the sequences, to my knowledge, come from the northern tip of the animal’s range, several hundred kilometers away; whereas here we were, in Quang Nam province, at the very southern extreme of the Saola’s distribution. It’s likely that, over time, as Saola populations became highly fragmented, they drifted apart genetically. The Saola from the north and south were both Saola, but from a genetics standpoint, they might look very different. If this is the case, then we were, with our leech collection efforts, using less-than-ideal Saola genetic reference sequences. And that could influence our ability to find Saola in the leeches we were collecting. Maybe, just maybe, the Saola skulls hanging on the walls of the Katu village could be a valuable source of DNA for our current efforts to locate the species in central Vietnam. As I pondered the trophies I thought to myself that these Saola individuals were gone from the wild but that they could still tell us their genetic secrets. Who says the dead can’t speak?

We left early the next morning and spent a week doing fieldwork in the rugged rainforests of the Quang Nam Saola Nature Reserve. After several days we staggered back into Aur village. I can’t speak for my team—but I was feeling decidedly more dead than alive. I know I looked it. I didn’t even have the energy to join our ever-generous Katu hosts in ceremonial wine-drinking that evening: I just crashed. But the surprises for this trip were far from over. The next morning, before leaving the village and heading back to civilization, one of the Katu elders grabbed me by the shoulder and led me to another hut. I had no idea what he wanted. But then I saw it: he wanted to show me two other sets of Saola trophies. And they were even more spectacular than the first two sets I had seen. The second skull, said to be from a mature female, had unusually long horns: two beautiful, symmetrical, razor-tipped jet stripes that went on and on and never seemed to end. I gasped. I had never seen anything so stunning in my life. This time the left-brained biologist in me vanished and I thought not about science but only marveled that such a wonderful creature can exist in the world. Soon my colleague from WWF found me and indicated that it was time to leave. I did—but reluctantly. And as I began the six-hour hike back to the highway I marveled at my good fortune: I had been able to examine four skulls from what is one of the rarest mammals on the planet. I considered myself lucky. But then I became introspective. And I wondered. I wondered how long this remarkable animal would survive. Given the current situation, the species probably wouldn’t last in the wild more than a few years, if that. I was determined to fight harder for its conservation—so that other generations could share the world with this remarkable animal.