Fishing Cats Quietly Slink Out of Existence in Southeast Asia

By Global Wildlife Conservation on March 22, 2017

After extensive camera trap surveys in key habitat failed to reveal a single fishing cat in Java, conservationists fear that the unique water-loving feline may be on the verge of extinction in Indonesia, if not already extirpated there.

“If the fishing cat is gone from Indonesia, it is following the extinction of the Bali Tiger in the late 1930s and the Java Tiger in the mid-1970s,” says Frederic Launay from Mohamed bin Zayed Species Conservation Fund, which helped fund the most recent camera trap surveys that wrapped up at the end of October 2016 and targeted habitat that scientists had not surveyed previously. “This is sad news, but we hope that we are proved wrong and the fishing cat is re-discovered on Java. Nevertheless, fishing cats still exist across a wide range and our focus should be on assessing population health and reducing threats elsewhere.”

Fishing cats have historically been found across 11 countries in Southeast and South Asia. Today they are hanging by a thread not only in Indonesia, but also in Vietnam and Cambodia. While Thailand harbors small, remnant populations of the species, there are probably not enough individuals to form healthy, self-sustaining populations. Myanmar has yet to be adequately surveyed, but any populations are likely restricted to southern Myanmar. Fishing cats are not known to occur in peninsular Malaysia, Sumatra or Borneo. Fishing cats face a deadly jigsaw puzzle of human-caused threats across Southeast Asia, ranging from poaching to habitat destruction, retaliatory killing for snatching chickens, to vehicle collisions, to drowning in fishing nets.

According to the IUCN Red List of Threatened Species, fishing cats are declining within all range countries. This species has suffered a global population decline of 30 percent or more in the past 15 years. The IUCN Red List classifies the species as Vulnerable.

“We’re seeing a southern and southeast Asian cat become strictly a South Asian cat because of habitat loss, poaching and retaliatory killing,” says Jim Sanderson, manager of Global Wildlife Conservation’s Small Wild Cat Conservation Program. “The replacement of coastal mangroves with industrial fish and shrimp farms has caused a massive loss of prey and habitat. To feed itself and their kittens, fishing cats have no choice but to turn to poultry and farmed fish, bringing them into conflict with people—retaliation is both swift and deadly.” 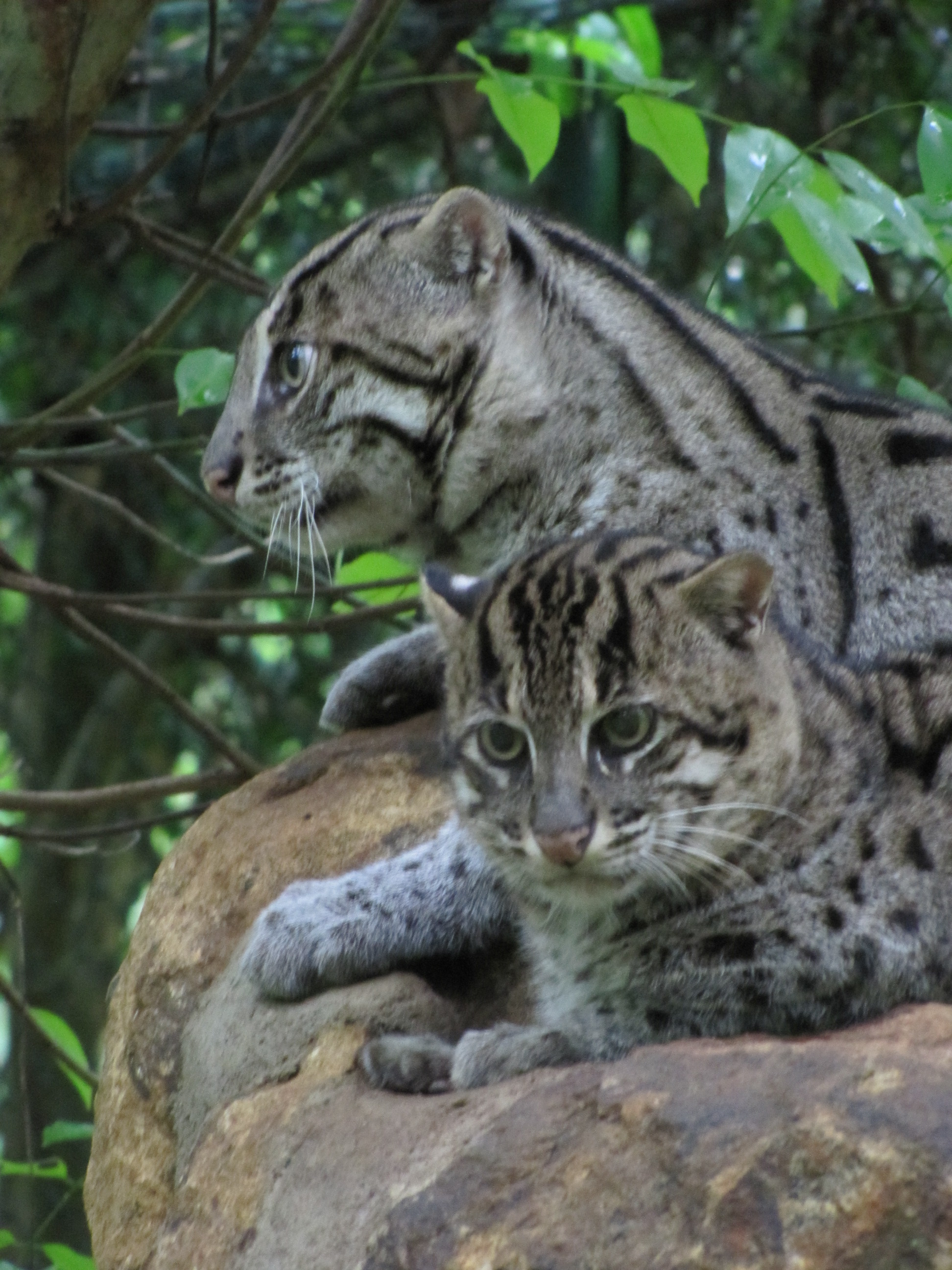 Preventing the extinction of this species across such a large part of its range will require the implementation of tailored conservation efforts and government programs to address the specific and unique threats in each country. Conservationists working with GWC and funded by the Mohamed bin Zayed Species Conservation Fund in Sri Lanka, Nepal, Pakistan and India currently implement active threat-reduction projects to help conserve their populations of fishing cats.

“Fishing cats are easily the most colorful and charismatic of Sri Lanka’s small cat species, but this is not what drew me to them,” said Anya Ratnayaka, Mohamed bin Zayed Species Conservation Fund grant recipient and co-founder of Small Cat Research and Advocacy, an NGO based in Sri Lanka. Ratnayaka is currently studying fishing cats in urban environments and helping to conserve them. “What really drew my interest was the fact that there were reports of them showing up all around Sri Lanka’s capital of Colombo, something that I have since confirmed with camera traps and GPS collared individuals. Even as Colombo’s wetlands shrink each year, I would like to make sure these animals are protected and preserved for future generations to see.”

In an attempt to assess the status of fishing cat populations across its range, the Mohamed bin Zayed Species Conservation Fund, with help from the Small Cat Conservation Foundation and GWC, has supported 19 fishing cat projects with $155,000 over the past three years. Sanderson plans to travel to Myanmar this year to assess the species’ population there with the help of local conservationists. Through local partners, GWC also aims to conduct a fishing cat survey in Vietnam in the last place they were recorded. These kinds of surveys can help conservationists find remaining populations to confirm their survival and spark conservation action that aids in their recovery.

Fishing cats live near wetlands where they catch fish and crustaceans, often completely dunking their heads underwater. Although fishing cats are particularly charismatic felines, distinct from many cat species in their love for water, their plight has attracted less attention than the larger feline species that share their range, such as tigers and leopards.

“My hope is that by calling attention to the rarity of fishing cats on Java and in other Southeast Asian countries, heroic efforts can be made to locate them as soon as possible so that conservationists can launch efforts to save them in places they still exist. We must not let them slip away without trying,” Sanderson says.