It was a beautiful day for indigenous Rama forest guards Tomás and Valerio as they paddled up the clear water of the Indian River, under the canopy of the primary rainforests of Nicaragua’s Indio-Maíz Biological Reserve. They were on a routine patrol deep in the Rama-Kriol indigenous territory in southeast Nicaragua, where they have lived for decades hunting, fishing, and farming with their families. But around mid-day, when they came around a bend they were startled to see a team of nine mules at the river bank, and signs of a large group of men accompanying them—clearly up to no good at such a remote, protected site.

Unarmed and wanting to avoid a violent confrontation, they turned the boats downstream and paddled the two-day trip back to get more help. When they arrived days later, they found hundreds of fish heads and spines, a smoking rack, and a rock dam. It was clear—these men had been illegally poisoning and harvesting fish, again. The rock dam was set up to catch the poisoned, dying fish, and the mules were there to bring smoked fish to markets in the agricultural frontier.

This was not the first case. 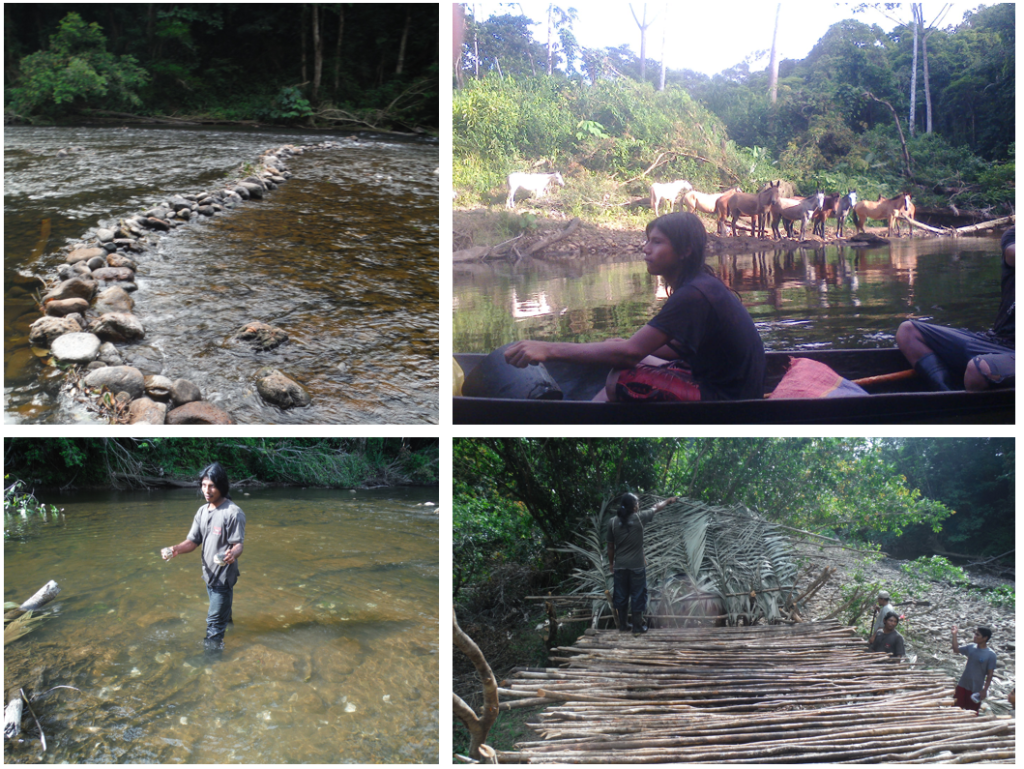 People in rural southeast Nicaragua are already familiar with incidents like this. Although this case was on a larger, more organized scale than is typical, it is common for people to use pesticides to catch shrimp and fish in rivers. The practice’s impacts to human health and aquatic ecosystems can be devastating. It is rarely reported, and unheard of for authorities to address the issue on any scale. It’s also illegal in Nicaragua, even more so in Indio Maíz, and is punishable by a $5,000 fine or 6-12 months in prison. Existing records of this practice from other sources show that it is global in scale, although there are very few accounts in the scientific literature.

This year, Global Wildlife Conservation has been working with partners and the local indigenous communities to get a better handle on the extent of the use of pesticide fishing, the effects on people and wildlife, and the best methods to curb the behavior.

When I first met GWC’s Central America and Tropical Andes coordinator Dr. Chris Jordan in Nicaragua, I was in the stages of developing ideas for my master’s thesis in Fisheries and Wildlife at Michigan State University. He and his partners in the Rama-Kriol government helped me hone in on the idea of assessing the impacts of illegal deforestation in the Rama-Kriol territory on stream ecosystems and traditional river fisheries. They mentioned that there had been cases of colonists fishing with pesticides and were very concerned about it. At that point, the GWC-backed Rama-Kriol forest ranger team was in its first year and had reported some of these incidences. This all sounded bad, and somewhat strange, but until I went to the field and talked to people, I had no idea the great extent of this problem.

During my field work, I asked just about everyone about the practice, and the stories were unnerving. Don Rigoberto, one of the forest rangers on the northern boundary of Indio Maíz, described some of what he had witnessed.

He and his wife were washing clothes in the river one day and noticed a wall of jumping fish and shrimp coming at them. Then they started to feel burning sensations on their arms and legs. Turns out their upstream neighbor was fishing with pesticides. Another upstream neighbor, a 15-year-old, lost eyesight in one eye because she was using the chemicals to fish and didn’t understand the potency of the chemicals. Rigoberto’s pregnant niece unknowingly consumed poisoned water in the creek behind his house and started to convulse when she arrived at the house. Her skin turned blue and her eyes bloodshot, Rigoberto says. She nearly died. Months later when his niece’s baby was born, the baby was sick and had to be brought to a faraway hospital for a long stay.

Not only does drinking poisoned water put pregnant women at risk, but also pregnant cattle. Multiple ranchers from Rigoberto’s community told stories of cattle losing their young before birth because they drank from poisoned waters.

Rigoberto described other cases where he noted the ecological effects—creeks stained yellow after the chemicals passed through, shrimp and fish dying more than 1,000 meters downstream of the poisoning site. He said often people are eating the fish, but other times they are just trying to catch shrimp to fish within the bigger rivers.

Joturus pichardii, Bobo Mullet: This species migrates from headwaters every year to the river mouth to spawn. It has seen regional declines due to dams and overharvesting—and yet holds strong in Indian River. It is a historically important subsistence species for Rama and Kriol communities. Photo credit.

Disappearance of the fish

Don Santiago, lifelong resident of the Rama community of Sumukat on the Kukra River, north of Indio-Maíz, explained to me how people carry out the practice. Powdered pesticide is incorporated into ground-up corn or beans and thrown in the pools where fish are. As the fish consume the food, they consume the chemical and start to die and float up to the surface. People also use liquid pesticide, which fish take into their gills. The practice is common for the cattle ranchers within Santiago’s community, and the fishery is very degraded. But it wasn’t always that way.

The progression of stream degradation in his community is tied to the agricultural invasion. When he first lived along the Kukra River, the land was mostly primary rainforest. The rivers were full of a diversity of fish, and they relied heavily on them for food. In the last two decades, ranchers from the west have cut, burnt, and cleared forest, often right up to the stream bank. As they have introduced pesticides for agriculture, they have also used them in fishing. As the forests have disappeared, so have the fish. The combination of chemical fishing and streambank erosion from cattle has left streams unrecognizable compared to how Francisco knew them before the invasion, he says. His community can no longer rely on the rivers as a resource as they did in the past.

To lose river integrity in this way is not only a threat to traditional Rama lifestyles and their subsistence-based autonomy, but also to the region’s biodiversity. Being undammed and surrounded by primary rainforest, the rivers and creeks of Indio Maíz are uniquely preserved and have fascinating and largely unstudied ecologies. They hold a rich diversity of fish, many species of migratory shrimp, and undocumented aquatic insect species. It would be more than a shame for their natural integrity to be lost because of such blatantly illegal and short-sighted behavior. 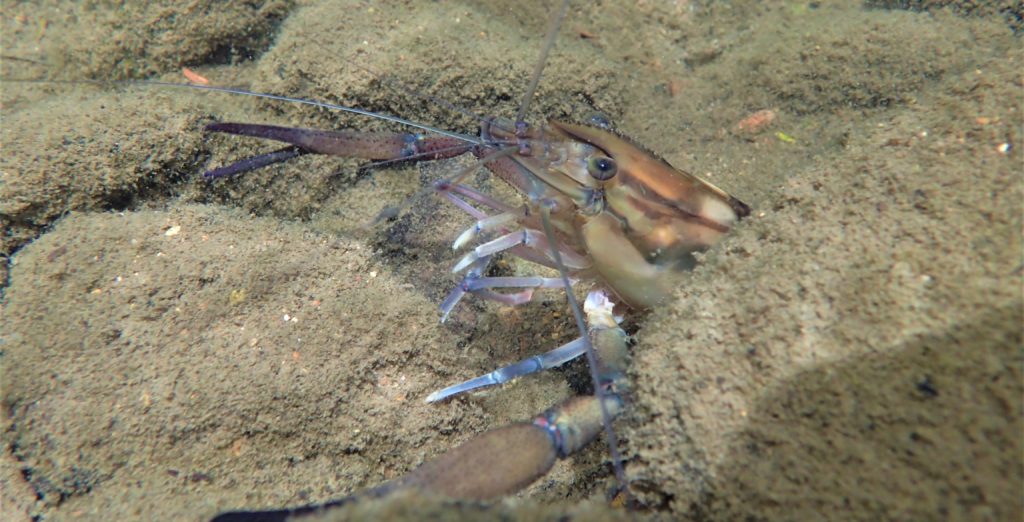 Macrobracium carcinus, Bigclaw River Shrimp: After being measured and released from overnight traps, a large freshwater prawn positions defensively against a rock in the flow of a small stream in the Indio-Maíz Biological Reserve. These lobster-like shrimp can travel over 100 kilometers journey's down river every year to the estuary to lay their eggs in brackish waters, where they are often harvested by local fisherman. (Photo by Joel Betts)

Wildlife crime is often the focus of conservation criminology, but fisheries crimes can be just as or more damaging to people and the ecosystems that support them. These stories represent an ecological epidemic—an example of behavior that is irrationally myopic. What motivates people to carry out such a devastating practice? Do people not understand the risks or damages involved? How have education and management systems in these reserves failed to the extent that people don’t think twice about poisoning rivers? How might the issue be addressed?

GWC has received a grant from the New England Biolabs Foundation to better understand these questions and address this issue in Indio Maíz. In addition to funding ranger patrols to document these incidences, the grant also funded focus groups and interviews conducted by GWC associate Armando Dans and assistant, Juan Mendoza, in five communities in and surrounding the reserve to better understand the why, where, who, and how of pesticide use in fishing.

Using this information, this summer and fall GWC and local partners are mounting an education and advocacy campaign about the practice to help people in the communities understand its impacts and promote action against it. The hope is to create responsible bystanders who naysay the practice in communities, and to leverage pesticide vendors and community centers as education points. We also hope to raise the profile of the issue nationally and internationally through news and academic articles. The Rama-Kriol action plan for the Indio-Maíz Biological Reserve describes the issue of illegal pesticide fishing as a major priority for the reserve. As the agricultural frontier continues to move into the Rama-Kriol territory, illegal pesticide fishing and forest loss will continue. The long-term health of fisheries, and the traditional culture that these support may be lost if direct action is not taken.

Real names of the forest rangers were substituted for the sake of identity protection.

Joel Betts recently graduated with his master’s from the department of Fisheries and Wildlife at Michigan State University and started as GWC Associate Scientist, in support of the pesticide fishing projects (and other projects) in Nicaragua. He has partnered with GWC over the last 3 years conducting research on the impacts of the illegal colonization of the Rama-Kriol Territory on its river ecosystems.