Forests That Drink From The Clouds

Still, humid air alive with the chatter of monkeys and the calls of colorful birds under a towering, tangled canopy. We are all familiar with the image of the rainforest. Vast expanses of green cloaking lowland areas in the tropics, rainforests tend to vary little in temperature and humidity.

But as we scale mountains rising into the clouds, changes in temperature and rainfall begin to alter these forests in significant ways. Above 1,000 meters temperatures dip, and warm air that rises from the forests below condenses into a fog that envelops stunted trees dripping with lichens and mosses. This ethereal environment, reminiscent of a scene from Lord of the Rings, is cloud forest.

Cloud forests drink the fog that shrouds them, releasing it slowly into small creeks that feed streams and rivers below. Whereas rains are highly seasonal, these ‘sky sponges’ feed tropical waterways every day of the year, with profound implications for the diversity of life downstream – including our own. Cloud forests are living aquifers.

Cloud forests literally hold back the mountain, preventing mudslides during torrential storms. Indeed, the ’sponge-effect’ of cloud forests has been held in high regard for millennia. On the island of Luzon in the Philippines, for example, forests on hilltops were considered sacred to the indigenous people, and no one would dare cut them down. 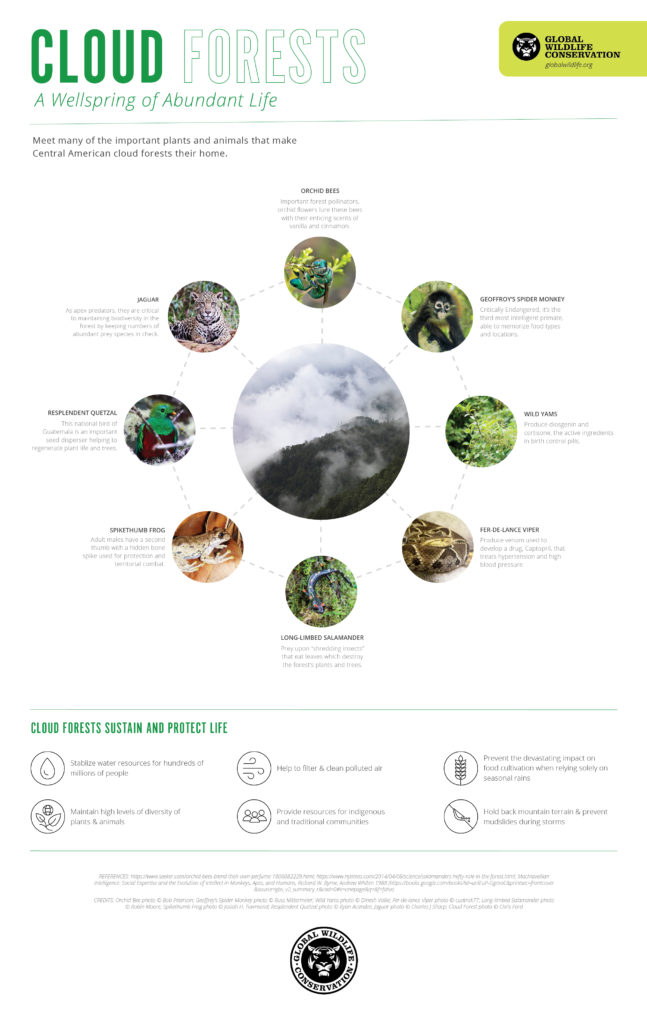 In addition to trees like the Endangered Guatemalan Walnut Tree that bring structure to the forest and provide a home for the lichens, mosses and ferns that drip from their branches, cloud forests are home to an immense variety of plants and animals. Each plays a role in keeping this living, breathing system alive and running, like cogs in a complex and intricately designed machine. To provide just a glimpse, let’s enter a typical Central American cloud forest to meet some of the residents.

In the forest canopy, Resplendent Quetzal find camouflage against lush foliage in the iridescent green plumage. The national bird of Guatemala does more than provide a melodic soundscape to the forest. By swallowing fruits like avocados whole before regurgitating the pits, they disperse seeds far and wide. Up to half of all trees in the cloud forest rely upon birds like the quetzal for seed dispersal. The Resplendent Quetzal is also a major draw for ecotourists and birdwatchers, which can be an important source of revenue for local communities.

Another important planter of trees is Geoffrey’s Spider Monkey. The third most intelligent nonhuman primate, the incredible mental capacity of this monkey may allow it to identify and memorize many different types of fruits and their locations. With long arms and hook-like hands, these monkeys move by swinging beneath tree branches, and can use their tail like an extra limb to pick fruits and scoop water from tree holes. Geoffrey’s Spider Monkey requires large tracts of protected forest to survive. 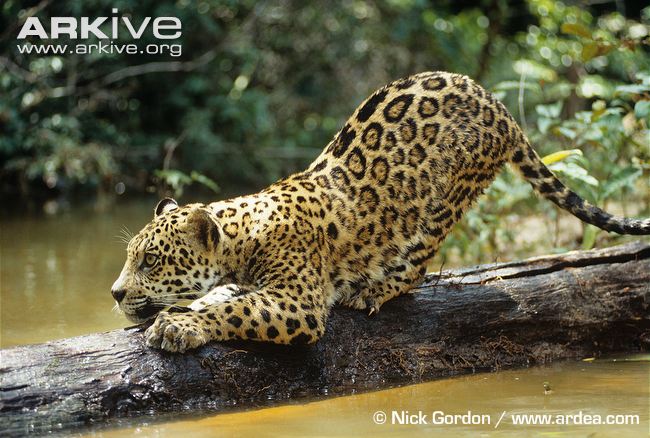 Slinking in the Central American cloud forest undergrowth, Jaguar hunt prey that includes spider monkeys. Jaguars have been called an “umbrella” species that can be used to measure the overall health of a forest. As apex predators, they are critical to maintaining biodiversity in the forest by keeping numbers of abundant prey species in check. 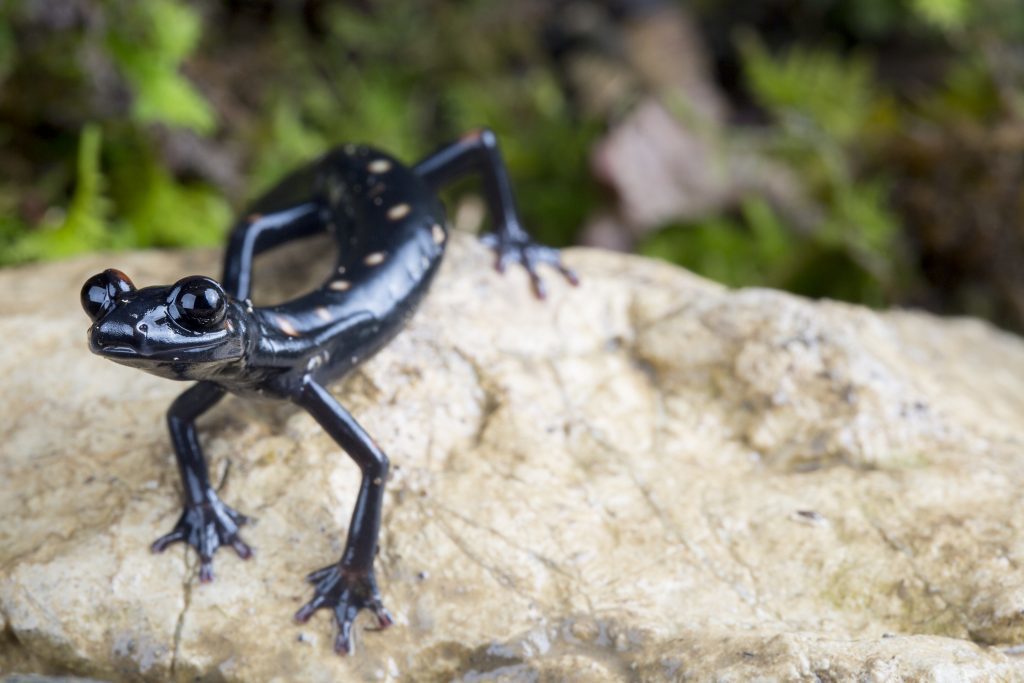 It’s not just the large, visible animals that play a role. At dusk, salamanders like the large-eyed Long-limbed Salamander emerge from under large roots to scale mossy trees to feed on insects. A recent study in the journal Ecosphere revealed that salamanders play a big role in the global carbon cycle by preying upon “shredding invertebrates”–that is, insects that live off leaves. In a nutshell, the more salamanders there are in the forest, the fewer shredding insects, and the more carbon remains locked up in the forest.

Zipping among flowers like miniature metallic spacecraft, orchid bees shimmer green, gold or blue as they pollinate flowers. Some orchids rely on male bee orchids exclusively for pollination, and in turn the bees collect fragrances from the flowers to attract females. Orchids often display elaborate adaptations designed to place pollen packets onto the bees.

Lest we forget the denizens of the dark, damp understory, Indigo Milk Mushroomsgrow around the roots of certain trees, exchanging minerals and amino acids from the soil for fixed carbon from its tree host.

Mutualistic relationships such as these abound in cloud forest, forming a rich tapestry of life evolved over millennia. And yet, as long as these ecosystems take to form, they are being lost the world over in the blink of an eye, razed for minerals or precious metals or agriculture. With them we lose not only the services they provided, but also the blueprint. Just like taking apart an antique grandfather’s clock and throwing away some of the cogs, we cannot recreate a lost cloud forest.

By highlighting some of the wonders of the cloud forest, we hope you will be encouraged to support our work in protecting these fragile and forgotten forests and all the animals and plants that call them home.