Happy Hatchday: 21 Years of Conservation Success for the Kakapo

By Global Wildlife Conservation on March 23, 2018

It has a low-frequency mating ‘boom’ that can travel several kilometers.

It has a sweet scent, similar to honey.

This is how the New Zealand Department of Conservation describes the Kākāpō, a charismatic parrot species found nowhere else in the world. These descriptions do more than just offer a quirky portrait of this charismatic species—they also represent the tremendous knowledge biologists have gained since 1995, when the department began the Kākāpō Recovery Program to protect this species, then on the brink of extinction with only 51 individuals left.

Sirocco was born in 1997—after contracting a respiratory illness at only three weeks of age, he required special treatment to survive. He became one of the first male hand-reared Kākāpō of the program—an experience with a steep learning curve that set the stage for future successes.

“Sirocco’s hatchday this Friday really shows just how far the program has come in 21 years,” says Bronwyn Jeynes, a ranger with the Department of Conservation’s Kākāpō Recovery Program. “When the program first started, we knew so little about the Kākāpō. We didn’t really understand breeding triggers, chick rearing, what they ate, how they behave, or even how to look after them. We’ve learned so much and all that new knowledge is helping us save this species.”

Coming Back from the Brink

Kākāpō were once found across New Zealand and were among the most common birds in the country. But by the 1970s, the future looked bleak for the bird and biologists feared its extinction. During more than 60 expeditions between 1949 and 1973 to find this parrot species, biologists found only six individuals—all male. In 1977, the Department of Conservation found 18 males in Fiordland. Only one of these birds ended up passing on his genes to the current population. Later that same year, biologists found another population of less than 100 Kākāpō living on Rakiura/Stewart Island.

The celebration of these rediscoveries was short lived, however. The animals fell victim to the same pervasive threat—introduced pests, such as feral cats and stoats (or short-tailed weasels). It wasn’t until 1995 when the tides truly turned for the Kākāpō with the establishment of the National Kākāpō Team to manage the 51 known individuals at that time. Through a combination of intensive monitoring in the field, regular health checks, predator control and supplementary feed, the population has rebounded today to 149 individuals.

“The dedication of the volunteers and staff is incredible,” says Wes Sechrest, chief scientist and CEO of Global Wildlife Conservation. “And the vision of the Department of Conservation, the Māori, and other local communities to restore this native species across its natural range is inspirational. We’re very lucky not only to have this animal on the planet, but to have a chance to help recover and rewild these populations of Kākāpō across New Zealand.”

The successes of the Kākāpō Recovery Program have been hard fought, with researchers and thousands of dedicated volunteers working to monitor the species and reduce population threats, such as predation by feral cats and stoats and lack of genetic diversity. Currently, the entire known Kākāpō population resides on three sanctuary islands—Whenua Hou/Codfish Island, Anchor Island and Hauturu-O-Toi/Little Barrier Island—where teams of researchers and volunteers are steadfastly working to increase population growth, often spending months at a time without a connection to the outside world. 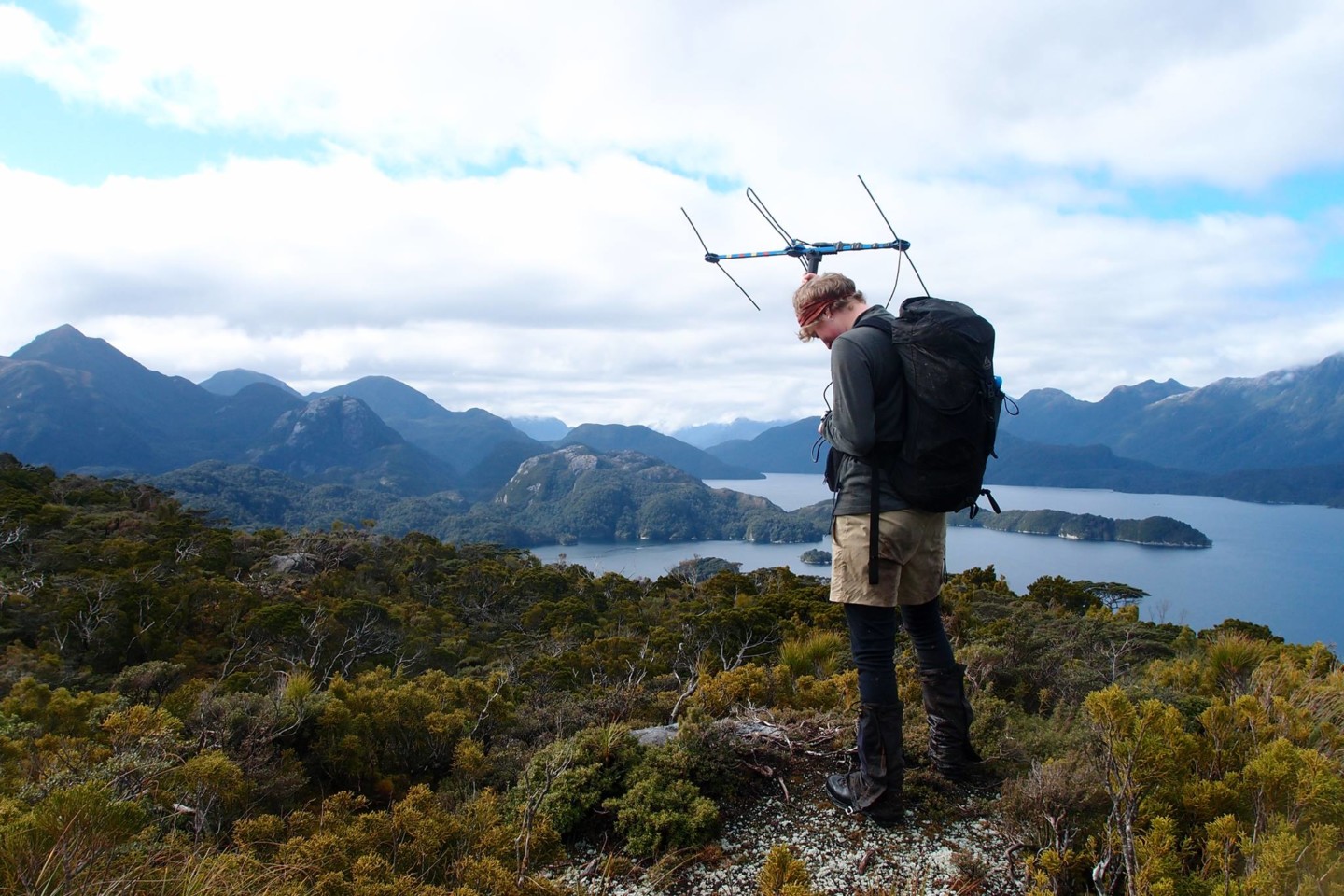 In November, Sechrest traveled to one of the islands, Anchor Island, with the Department of Conservation, to help with the population monitoring program. The team’s aim was to find Horton, a male Kākāpō living in Fiordland National Park. The recovery program uses small radio transmitter backpacks strapped around the wings of the birds to monitor their movement, providing information about their movement, whether the females are nesting, who the birds mate with—and when. Each year, researchers must track down individual Kākāpō to replace the transmitters.

“You can see on my satellite GPS the trail that we had to follow that day—it was up and down, and up and down these steep cliffs to try to figure out where he was,” Sechrest says. “We could barely see him when we found him because he blended perfectly with the moist, mossy forest. And that was Horton, sitting up in the tree, doing his best to hide from us.”

According to Sechrest, Horton cooperated as the biologists changed his transmitter. In addition to replacing the transmitter, the team also performed a routine health check, measuring Horton’s weight and checking for parasites before releasing him and watching him scramble back up the tree. 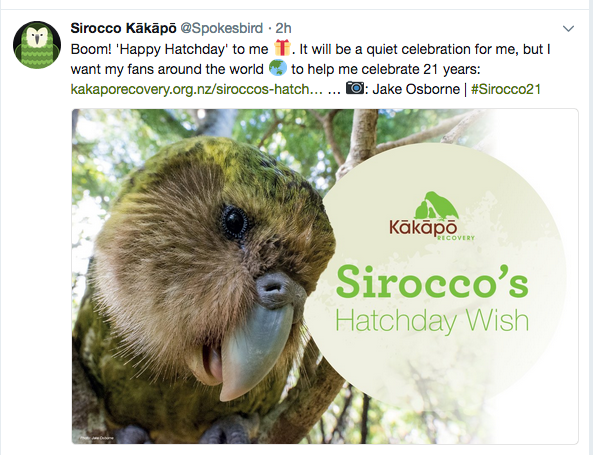 The recovery program had retrofit Sirocco, too, with a transmitter, but in 2016, the transmitter failed and Sirocco—the star of the BBC’s Last Chance to See—vanished for two years. Only this year did rangers track him down again, just in time to celebrate his 21st hatchday. While Jeynes says each bird has its own personality, Sirocco’s reputation precedes him.

“Sirocco is quite cheeky and you hear lots of stories about him always trying to be in the middle of things,” Jeynes says. “As a young bird, if the rangers wouldn’t look at him, he would pretend they couldn’t see him and he’d sneak up behind them and jump on their gumboots. He’s well known for coming and knocking on the windows of the hut if he knows people are in there. He’s always curious, wanting to check things out and see what people are up to.”

The growth of the Kākāpō population warrants celebration, but that success comes with its own challenges.

“We’re now starting to run out of space on the Kākāpō sanctuary islands for additional individuals,” Jeynes says. “We need to find new places where they can thrive, but this is a difficult task because they are so susceptible to introduced predators. We want to move them to places with rimu trees because they actually trigger Kākāpō breeding seasons, and we have to get rid of predators anywhere we might want to put the birds.” 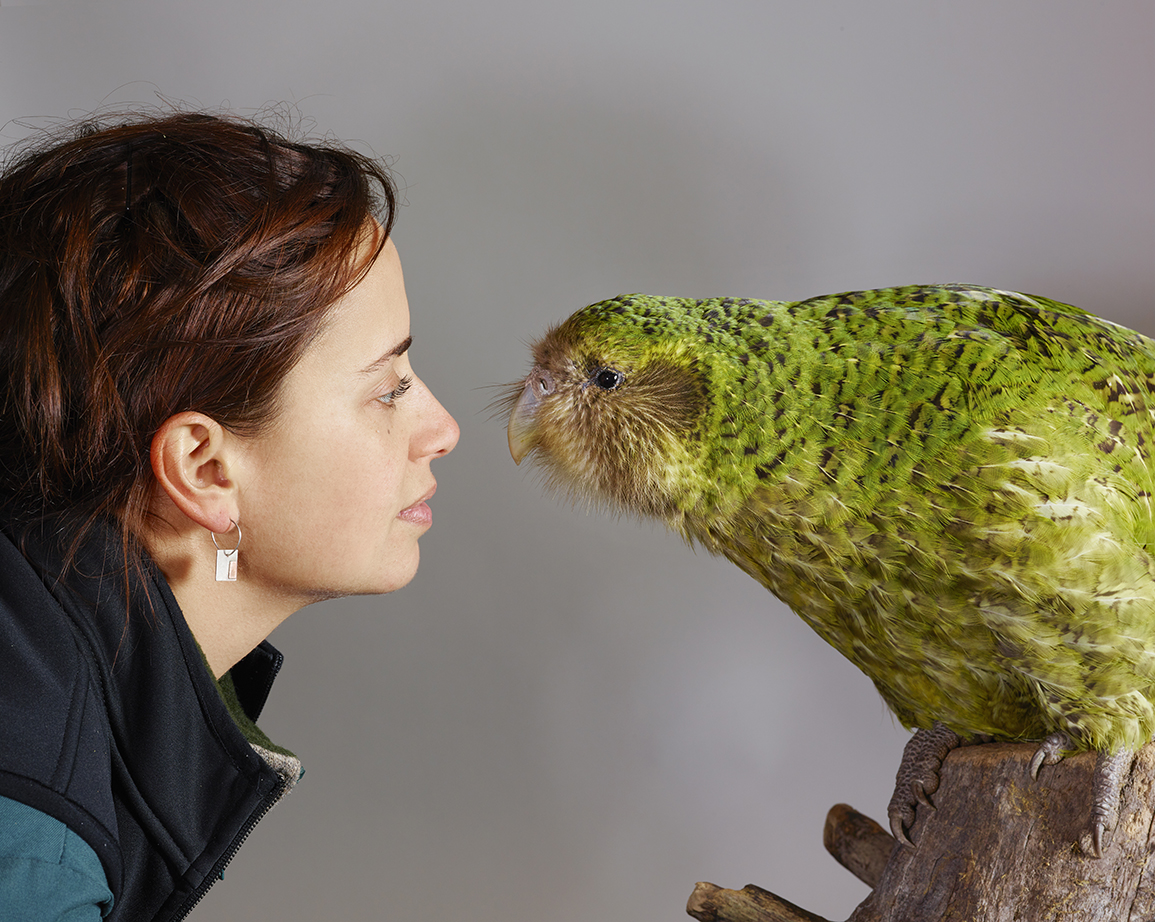 In the future, the program hopes to achieve a Predator Free New Zealand by removing predators from Kākāpō habitat and restoring them to their original ranges, such as on Rakiura/Stewart Island, home to the last wild Kākāpō before the program began and New Zealand’s third largest island. Doing so would require intensive management, but expanding their range is the only way to establish a sustainable population in perpetuity.

“There’s only so much you can do on these offshore islands, so we have to look at the next visionary step,” Sechrest says. “To once again be able to hear those booming male Kākāpōs on the main New Zealand islands during the breeding season, we’re going to have to do a lot more of this great work to recover them.”

Genetic diversity poses another challenge to Kākāpō recovery. According to Jeynes, the current known Kākāpō population has descended from the small, related population that was found on Stewart Island, with the addition of one other bird found in Fiordland who managed to contribute to the breeding population. This lack of genetic diversity has resulted in a genetic bottleneck in the current population, making the species especially vulnerable to disease.

Inbreeding depression in Kākāpō is linked to high infertility rates. Of the 122 eggs laid in the 2016 breeding season, the most successful breeding season yet, only 63 were fertile. According to Jeynes, a number of males are infertile or possess sperm defects, intensifying this problem.

To increase genetic diversity in Kākāpō, researchers are using artificial insemination and incubation, and genetic science to minimize inbreeding. As a result of these efforts, Kākāpō will be among the first species in history where all living members have been genetically sequenced. Artificial incubation of Kākāpō eggs under controlled conditions can help hatch chicks when mothers are unable to do so on their own. Using this method, researchers replace the real egg with dummy eggs until the real eggs are ready to hatch, at which point they are returned to their mothers. Part of this work includes conducting research on how reproducing female Kākāpō interact with dummy eggs.

“Kākāpō are very slow reproductively,” Sechrest says. “They live for decades, and their age of sexual maturity is quite high for birds. So recovering them requires long-term investment of resources, technology, and people on the ground.”

Hope for the Future

Recovering the Kākāpō population to 149 individuals since 1995 has been a global effort, built on the hard work and dedication of conservationists, researchers and volunteers.

“In addition to a massively committed team, we have international support from donors, partners, and organizations like Global Wildlife Conservation that have all jumped on board and are there to help make sure that this all happens,” Jeynes says.

Researchers on the Kākāpō recovery team are increasingly worried about the impacts of climate change on this species. According to Jeynes, even if supporters can’t donate or volunteer to help recover the Kākāpō, doing things like recycling, using less electricity, planting trees, and helping spread Sirocco’s story to highlight the importance of protecting species, can all help recover the Kākāpō. 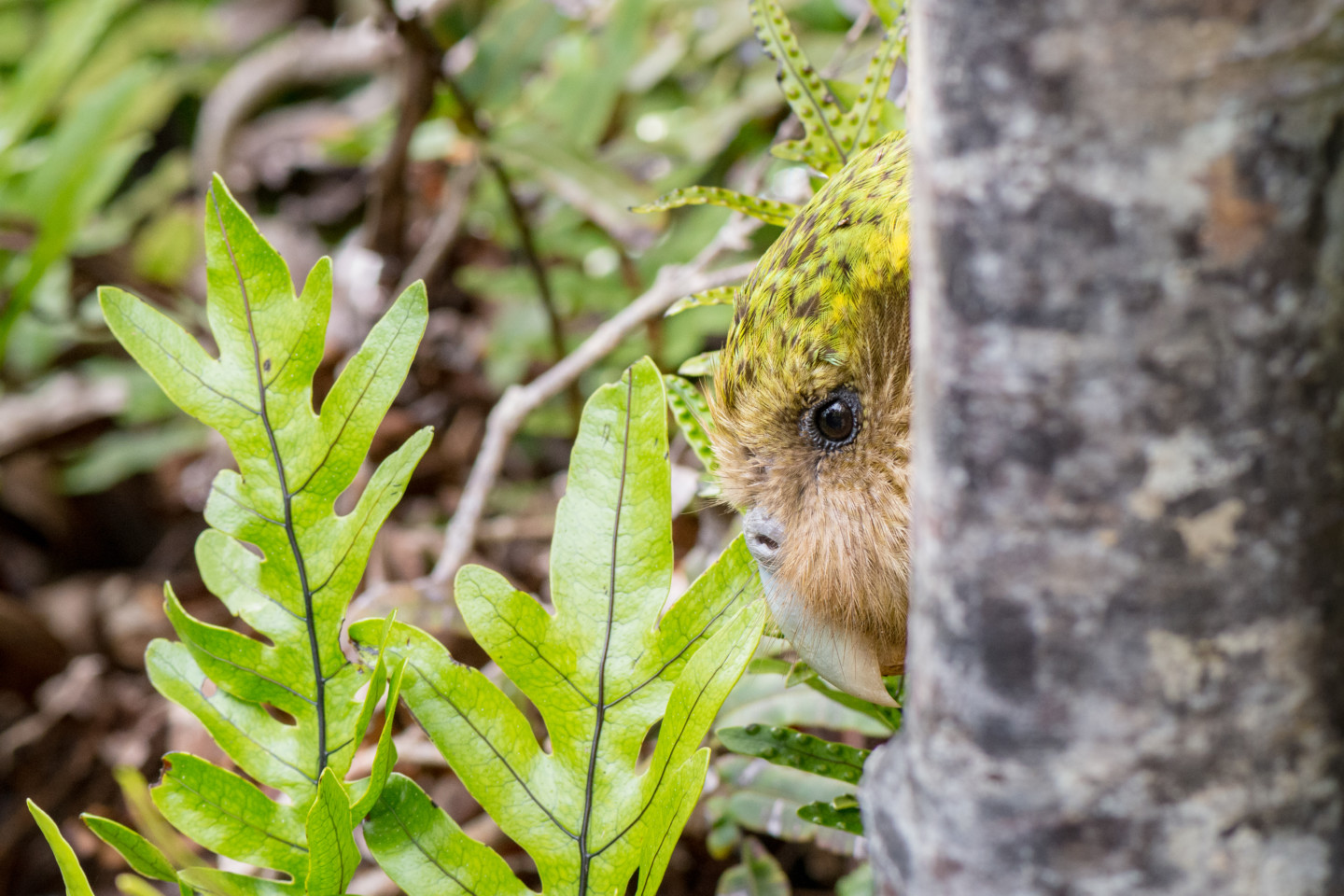 “Every single one of these species is a part of a bigger whole of a system that allows us to live on this planet, Sechrest says. “Species like the Kākāpō are not only iconic, but they are key to the health of their native ecosystems.”

According to Jeynes, New Zealanders have become more supportive in recent years of freeing up key areas from non-native predators, a move that would benefit the many native species, including Kākāpō. This, in addition to the passion of the recovery program staff, volunteers, researchers and supporters, signifies a bright future, she says.

“The Kākāpō are definitely not out of the danger zone, but everything seems to be moving in the right direction for the species,” Jeynes says. “So there’s a lot of hope.”