When amphibian conservation biologist Arturo Muñoz describes the 2015 die-offs of the Titicaca Water Frog (Telmatobius culeus) on the Bolivian side of Lake Titicaca, the details are grim:

Dead frogs floating belly up in the shallow water as gulls pick them off for dinner. The smell of the sulfate pollution dredged up from the bottom of the lake, responsible for suffocating the fully aquatic creatures. 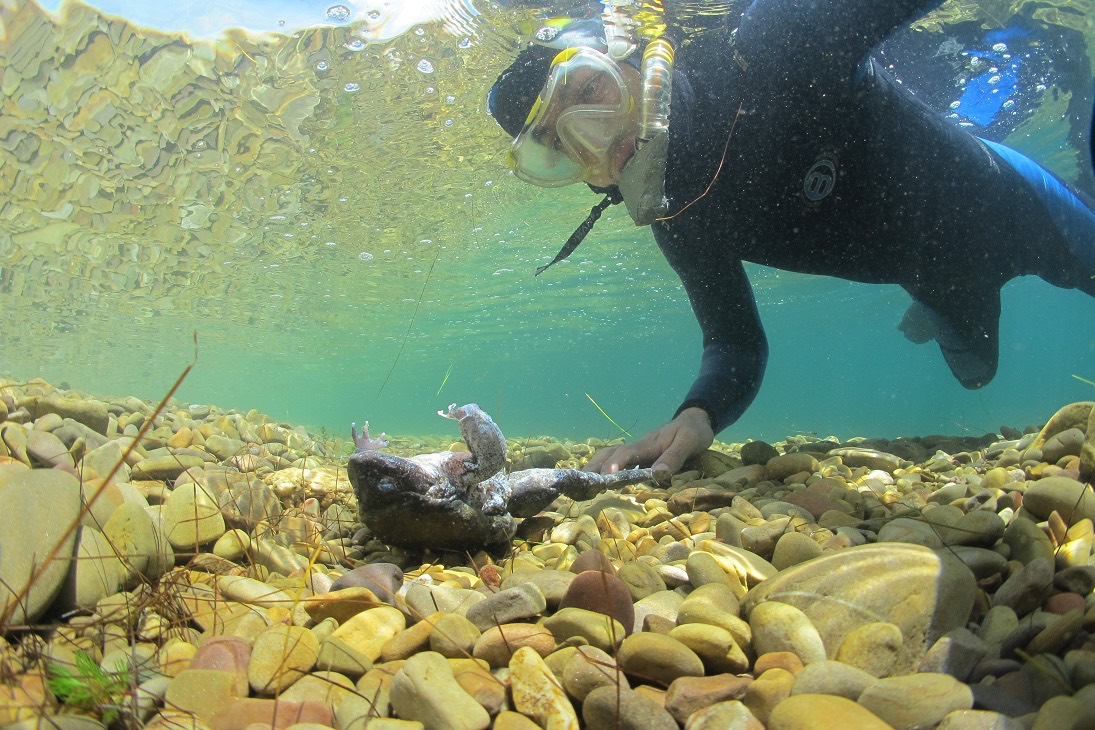 If this is the unthinkable thing of nightmares for a conservationist, then Muñoz and his colleagues in both Bolivia and Peru, which lays claim to the western side of the lake, are stuck in a perpetual loop of bad dreams. They have been witness to these die-offs in 2009, 2011, 2013 and 2015. Just this October, for the first time on the Peruvian side of the lake, they watched the seemingly sudden death of 10,000 Critically Endangered Titicaca Water Frogs whose only wild home, Lake Titicaca, was named the most threatened lake of the year by the Global Nature Fund in 2012.

And yet conservationists in Bolivia, led by Muñoz, in Peru, and around the world are steadfast in their mission not only to conserve the Titicaca Water Frog, but to bring together a coalition of scientific experts and to inspire the political will necessary to stem the tide of pollution and set Lake Titicaca’s future on a new, healthier, course. This is the best of conservation: innovating in the face of insurmountable odds, spurred by a utilitarian hope that even as humans have the power to destroy the planet—their only home—they also have the power to safeguard it.

“Hope is the only option,” Muñoz says. “Hope is critical. Hope is the very last thing that you lose.”

The Titicaca Water Frog seems to be the perfect embodiment of Mother Nature’s particular sense of humor, with its googley eyes, expressive face, and layer upon layer of loose, billowing skin. In reality, though, it is the perfect example of Mother Nature’s adaptive design—those folds in the skin allow the frog to breathe underwater without coming up for air. The Titicaca Water Frog is the world’s largest entirely aquatic frog. 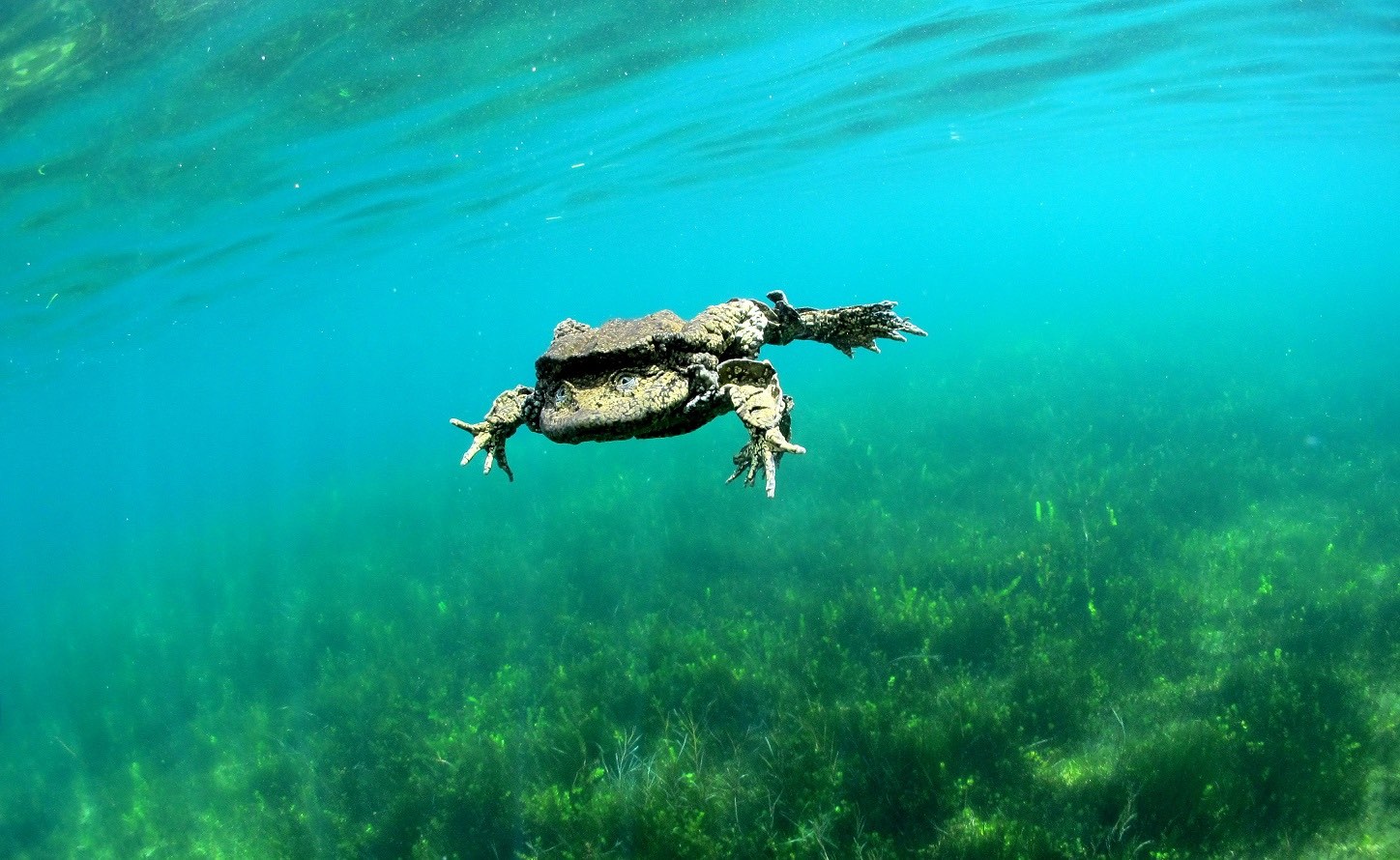 The Titicaca Water Frog is the world’s largest fully aquatic frog. Their billows of skin help them breathe underwater. (Photo by Arturo Muñoz)

“You can see the species has adapted an amazing equilibrium with this naturally harsh environment,” Muñoz says. “But that equilibrium is failing now. The species can’t adapt quickly enough to the domestic, industrial and agricultural pollution that is throwing this equilibrium way off balance.”

Increased sewage runoff seems to be the likely culprit of the most recent Titicaca Water Frog die-off, which was concentrated in a 50-kilometer stretch of the Coata River, a tributary of Lake Titicaca in Pruno, Peru. In 2015, the combination of an algae bloom caused by a build-up of nutrients and the release of hydrogen sulfide at the bottom of the lake as the result of high winds and heavy rains effectively cut off oxygen to the aquatic frogs. This wiped out 80 percent of the population in Lago Menor, the small side of Lake Titicaca on the Bolivian side. 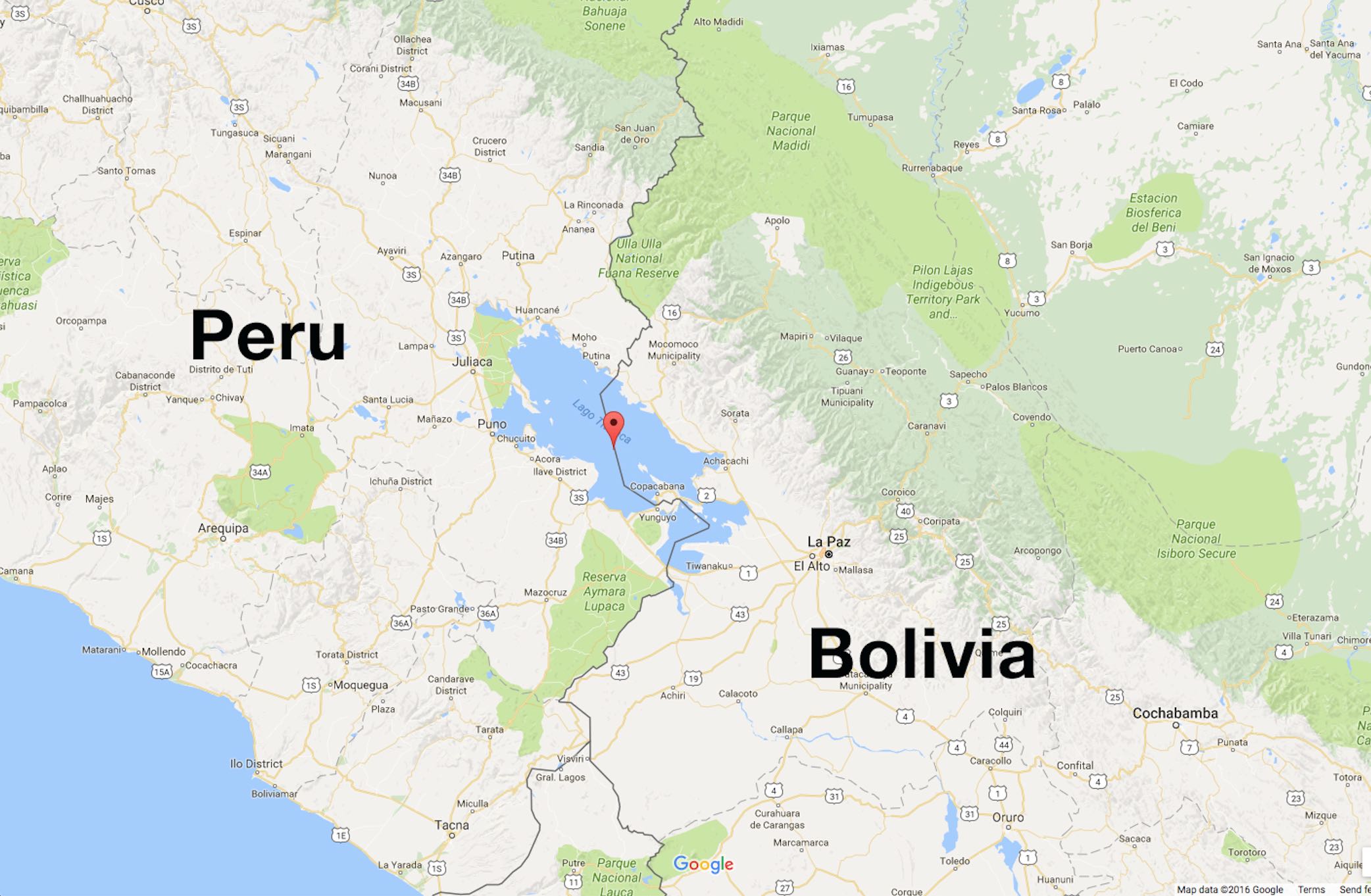 The Peru-Bolivia border cuts through Lake Titicaca, which has been named an Important Bird and Biodiversity Area and an Endemic Bird Area by Birdlife International, is within a Conservation International Biodiversity Hotspot, is a globally important wetland as a Ramsar site, and is part of a Global 200 Ecoregion.

The threats to the species don’t end there, according to Global Wildlife Conservation’s Amphibians Red List Officer Kelsey Neam. On the Peruvian side of the lake, introduced trout are preying on tadpoles and juveniles. The species is harvested in massive numbers for food and medicinal products, for use as an aphrodisiac and to treat various ailments. In May the New York Times wrote about the use of the Titicaca Water Frog as an ingredient in “green smoothies” at weekend markets in Peru and Bolivia, sold as an antidote to an array of health ailments.

As if that weren’t enough to force this species to the brink, both wild and captive animals have been diagnosed with chytrid and ranavirus, deadly pathogens devastating amphibians the world over.

In 2007, before the first mass die-off of Titicaca Water Frog, Muñoz established the Bolivian Amphibian Initiative and worked with his Amphibian Specialist Group Bolivia co-chair, Claudia Cortez, to secure funding to begin a breeding facility, develop a conservation plan and lobby the government for support. In 2009, after the first major die-off, they mobilized to look into what caused the deaths not only of the frogs, but fish and birds, too, and to identify areas of habitat where the frogs somehow seemed to be faring better with the aim of protecting those areas. 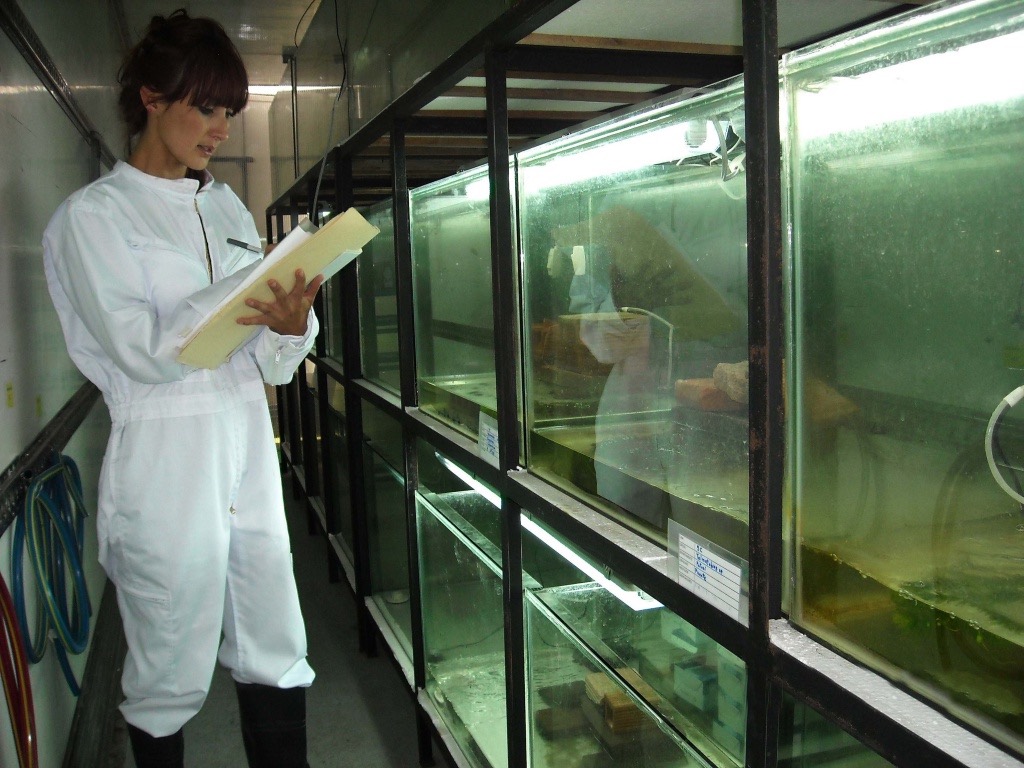 In 2010, both the Peruvian breeding center (established with confiscated animals by the Denver Zoo, Universidad Peruana Cayetano Heredia and Huachipa Zoological Park) and the Bolivian breeding center (established with wild animals by the Bolivian Amphibian Initiative in the Museo de Historia Natural Alcide D’Orbigny) produced the first-captive born Titicaca Water Frogs, a boon of hope for the species. In February of 2016, the Bolivian Amphibian Initiative and Museo de Historia Natural Alcide D’Orbigny worked with the Bolivian government to coordinate the transfer of 70 individual frogs to the museum for their ex situ care away from harm. These breeding centers are building an insurance population should the unthinkable happen: the species goes extinct in the wild.

Denver Zoo, too, has played a pivotal role in the conservation of the species since 2007, using sound science, education and outreach, capacity building and policy impacts and partnering with the Regional Government of Pruno and Peruvian National Service of Natural Protected Areas to make a difference for the frog, according to Matt Herbert, Denver Zoo’s director of conservation education. In November of 2015, Denver Zoo received 20 Titicaca Water Frogs from the Huachipa Zoological Park, becoming the only institution in the Northern Hemisphere to exhibit the species.

“Given the die-offs and the threats to the frog’s habitat, understanding the biology of the species in an ex situ setting and having multiple facilities may become an increasingly important conservation strategy,” Herbert says.

In the meantime, the partners are working on convening a meeting of stakeholders—including conservationists, water quality experts and government officials from both Bolivia and Peru—in November to address the crisis on the ground. The Bolivian Amphibian Initiative is also continuing its Lake Titicaca monitoring program established in 2015 with Museo de Historia Natural Alcide D’Orbigny. 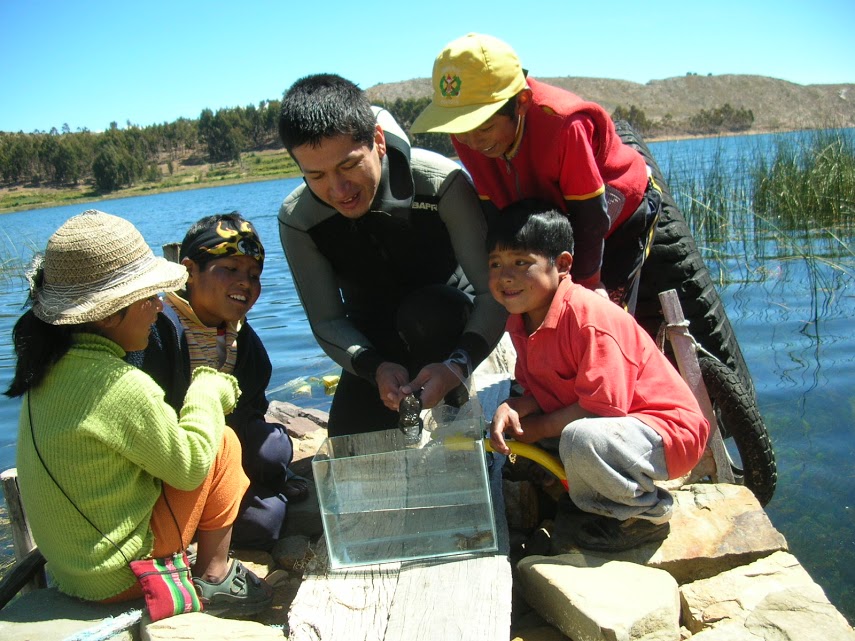 Arturo teaches the next generation of conservationists about the Titicaca Water Frog. (Photo by Arturo Muñoz)

Earlier this year Bolivia and Peru signed a bilateral agreement for the environmental recovery of Lake Titicaca, South America’s second largest lake. This included an outline of actions to decontaminate the lake and minimize pollutants through wastewater treatment and solid waste management. Unless these plans go into effect, Muñoz says, these die-offs will become annual events, which the species won’t be able to withstand much longer.

“We’re encouraged that the Bolivian and Peruvian governments want to lead this meeting and strategy,” says Muñoz, co-winner of the 2015 Sabin Amphibian Award with Cortez for their efforts to conserve the Titicaca Water Frog. “If the directive comes from the countries themselves, this is going to be a much more sustainable conservation effort.”

And while headlines around the world this month have painted a picture of doom and gloom with little hope for the Titicaca Water Frog, conservationists remain stalwart in their conviction that by bringing together conservationists, communities and government officials, they can reverse—or at least stave off—the devastating trend.

“If there is a plus side to the recent die-off,” Herbert says, “it’s that the world is now paying attention.”