How COVID-19 Is Impacting Rangers Worldwide

In some places, the coronavirus has made it harder to protect parks. In others, it’s bringing communities and rangers together.

In March, the Philippine island of Mindoro — like much of the world — was put under lockdown orders due to the alarming global spread of the coronavirus (COVID-19). In Mounts Iglit-Baco Natural Park, the rangers who work to protect the Critically Endangered Tamaraw (Bubalus mindorensis), a dwarf buffalo endemic to the island, were told to minimize their work in the field and focus on keeping themselves healthy.

“The rangers were worried that illegal hunting by people coming from outside the park might increase during this time,” recounts James Slade, Global Wildlife Conservation’s wildlife crime prevention officer. “So they sort of went against the rules and actually increased their patrolling.”

While taking care to minimize contact with local indigenous communities, whom they feared might be more susceptible to the virus, these rangers ramped up their monitoring of the park, and even (at their own expense) repaired a ranger station that had been destroyed by a typhoon. 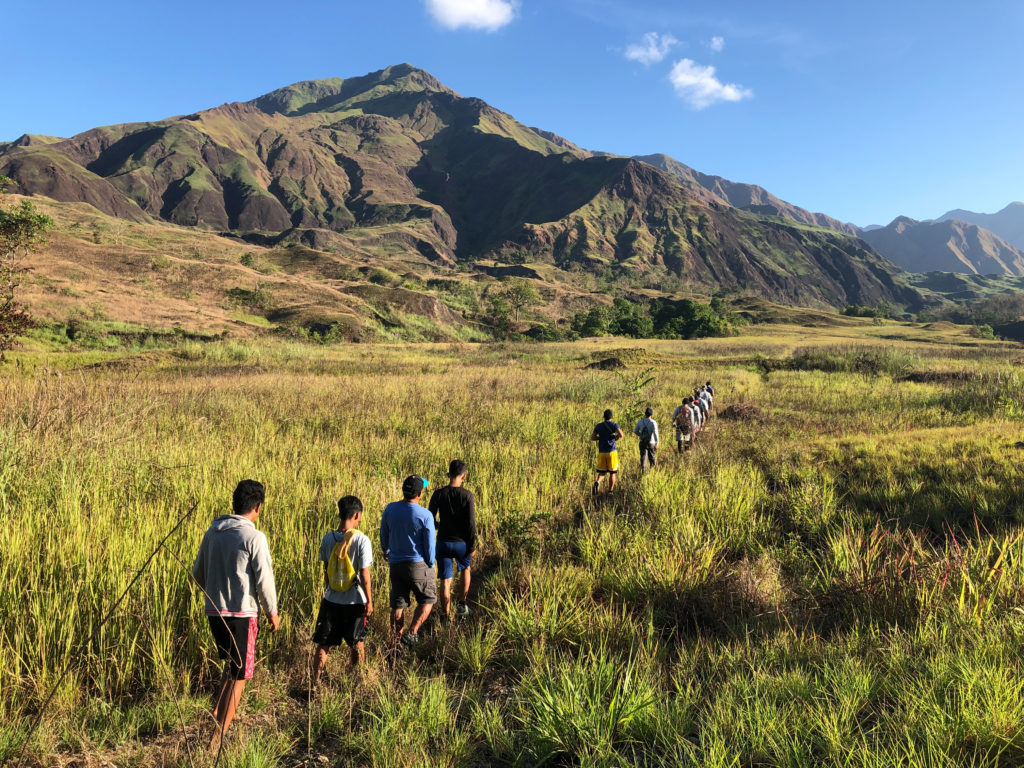 “They showed that it goes beyond just a job — it’s really a passion for them,” Slade continues. “And this is all during a time, of course, when these rangers would be concerned about their families, they might have very limited contact with them, they might have family members that were separated and unable to travel to one another because of these restrictions. But they just put their heads down and got on with the job.”

So far during the crisis, one Tamaraw has been killed by poachers. “Apparently, poachers boosted their activity in the park thinking that patrolling by rangers were lax due to community quarantine,” says Neil Anthony, the coordinator of the Tamaraw Conservation Program. This plan backfired; although the rangers were unarmed, they chased after the poachers, who ultimately escaped.

As the coronavirus continues to wreak havoc across the globe, the tragic mounting death toll has understandably taken center stage. But among its other widespread impacts is the effect on the rangers who protect the world’s last wild places — and the species that inhabit them.

Most Rangers Are Essential Workers

In theory, rangers are well set up to weather a pandemic. “Self-isolation is new to the world, but it’s not new to rangers,” says Rohit Singh, the president of the Ranger Federation of Asia. “Most ranger stations are very remote, with no outside contact for weeks, if not months.”

As of June 9, three rangers worldwide are known to have died of the coronavirus, all in Latin America. But the pandemic has upended the work of thousands more across the globe.

“In most countries, rangers are considered as essential services,” Singh says. “So legally they are allowed to operate even in countries that are in lockdown. But in some cases, because rangers are government employees, they are being asked or assigned to address the health crisis. For example, in Bhutan, rangers are being deployed along the southern border with India to stop the spread.” 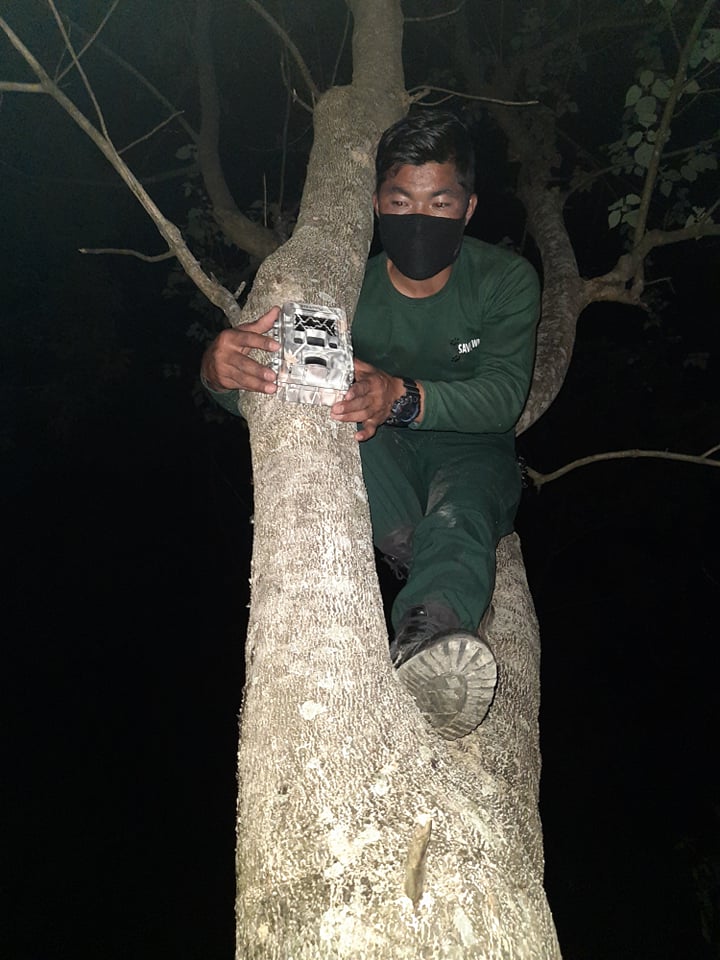 A Bhutanese ranger sets a camera trap for monitoring during the pandemic. (Photo © WWF Bhutan)

During the pandemic, some rangers are being diverted from their normal jobs to distribute food or transport personal protective equipment (PPE) to places of need. Many others have been cut off from their families for longer than usual due to lockdown measures, an added stressor that is sure to take a psychological toll.

But not all rangers have permission to patrol during lockdown. Many protected areas in places like Malaysia, Indonesia and parts of Latin America rely on indigenous and other community rangers to patrol them. Because these rangers are not government employees, they are not recognized as essential workers, and therefore most of their patrols have stopped due to movement restrictions as governments try to keep the virus at bay.

While all these measures may be necessary, it ultimately means fewer people on the ground patrolling protected areas — which could have consequences for species already under threat.

In Virunga National Park in eastern Democratic Republic of Congo (DRC), rangers are dealing with an additional challenge of an already difficult and dangerous job: preventing the park’s mountain gorilla population from contracting coronavirus. Because COVID-19 is a novel virus, we don’t yet know if it can infect non-human primates; however, there are many examples of other diseases being transmitted from human to gorilla — including Ebola, which frequently flares up in the region and may have killed up to one-third of the world’s western lowland gorilla population in the early 2000s. 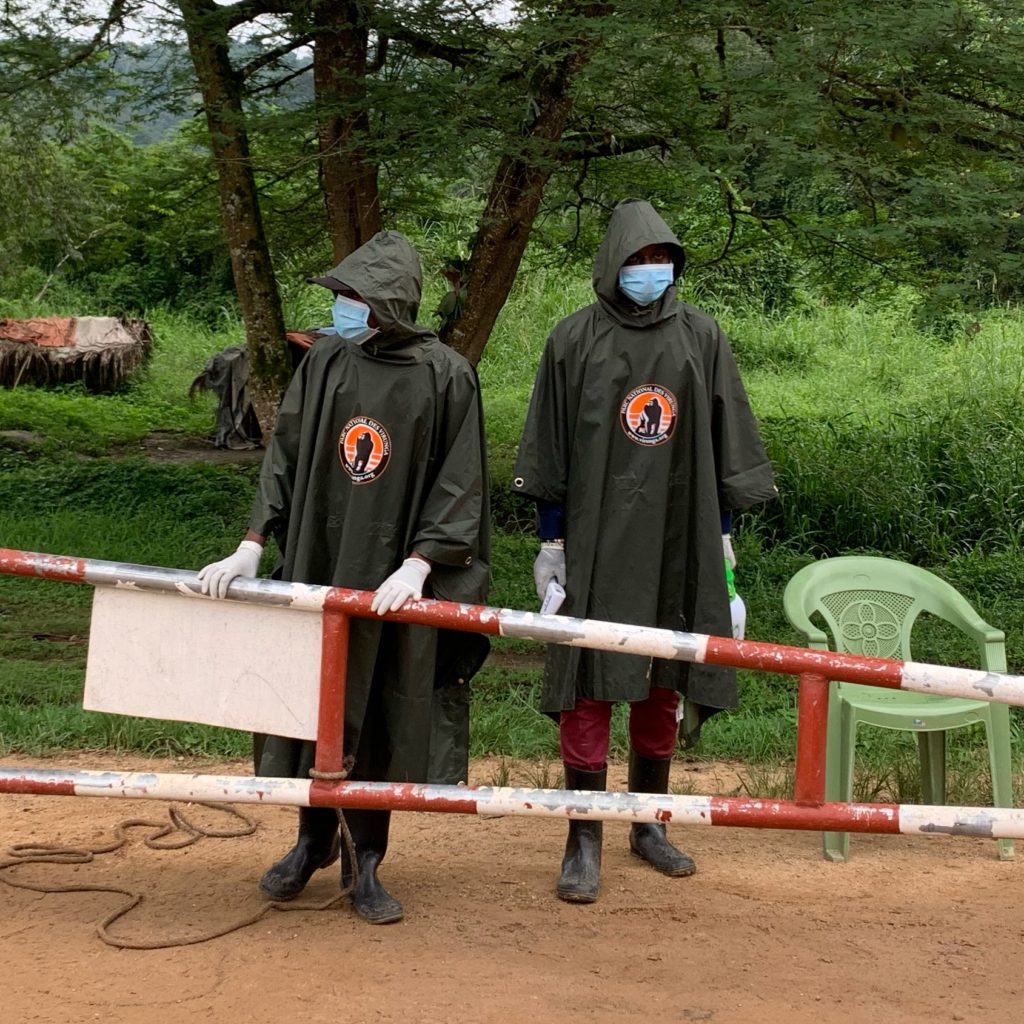 To reduce the likelihood of COVID-19 transmission, Virunga — already closed to tourists because of the crisis — is limiting human contact with the gorillas even more than usual. Among other measures, everyone who comes near the gorillas, such as trackers and rangers, must wear surgical masks, clean clothes and disinfected footwear. They are required to stay at least 10 meters from any gorilla they encounter.

“Two-thirds of Virunga National Park and most of its personnel operate in the Ebola affected area,” says a Virunga spokesperson. As a result, the park staff have lots of prior experience with fighting a deadly disease in a highly populated region that is also home to the only type of great ape whose population is actually growing. The park is using its staff and its network of partners to communicate COVID-19 health protection measures at places such as the neighborhood tap stands where women and children collect water every day.

“In the Ebola outbreak, rumours led to violence against health care workers and attacks that destroyed health centers,” the spokesperson says. “Good, clear information on transmission and public health is absolutely critical, especially in the early stages of a pandemic.”

Since the coronavirus outbreak began, some places have reported elevated levels of poaching — rhinos in Botswana, bushmeat and ivory in Kenya, illegal deforestation in the Amazon. In other places, however, poaching of certain species has decreased.

“This gives some of these species breathing space,” says Chris Galliers, president of the International Ranger Federation. “And it’s great for the rangers — it reduces the threat to their lives if there’s fewer poachers around.” 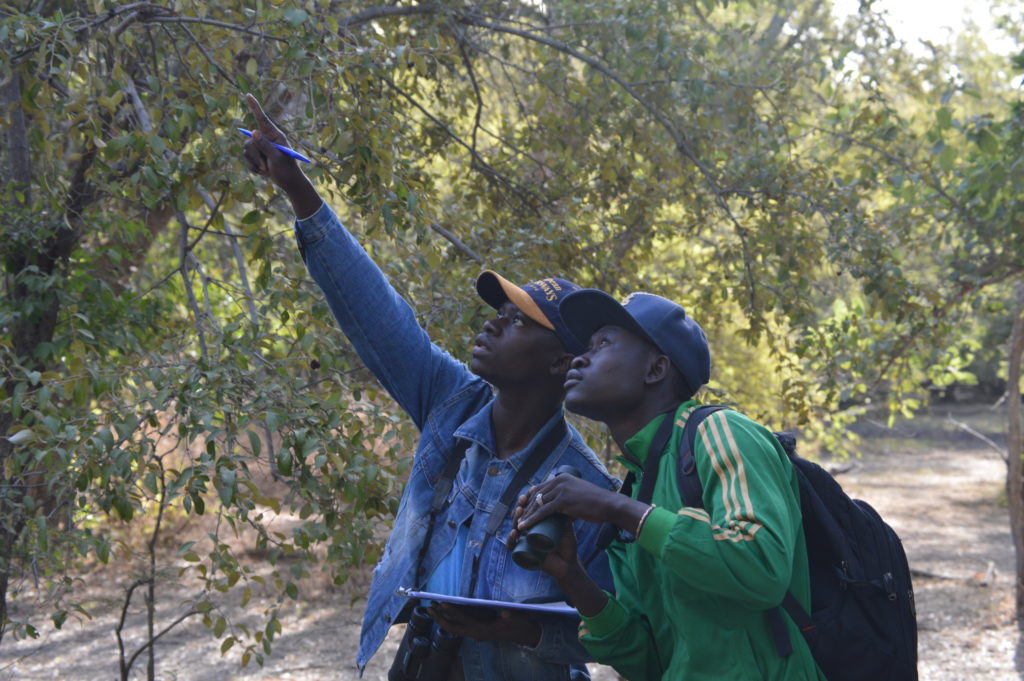 Red colobus rangers on a survey in The Gambia. Red colobus monkeys are among the most threatened groups of primates as the result in part of poaching. (James Slade, Global Wildlife Conservation)

One thing many rangers have noticed is more people living near protected areas. Galliers explains: “Before the lockdown in various countries, some rangers experienced a huge influx of people into the wide open spaces — people decanting from the urban environment trying to escape. That puts a whole lot of pressure on the parks.”

As cities empty out and people return to their home villages, this will almost inevitably put more pressure on nearby natural resources such as fuelwood, if not the wildlife inhabiting the parks.

“A lot of people are jumping to the conclusion that this is either going to be a boon for wildlife, and with everybody in their homes wildlife’s going to bounce back,” Slade says. “Or the other side of the coin, people think that poaching is going to be astronomical because of this. But overall we really just don’t know, and that’s the worrying part.”

One thing we do know: as widespread shutdowns prevent tourism and other economic activities from taking place, cash-strapped locals will have fewer options to provide for their families.

“Any sort of economic crisis can lead to a higher level of poaching because people are willing to take more risks, and almost need to in order to survive,” Slade says. “But at the same time, if we lose megafauna such as the lion, the rhino, or the elephant, then what’s going to happen?”

In some regions famous for their wildlife, these species are the lifeblood of local economies. And in places that normally depend on one “tourist season” to bring in income, these few months of disruption could wipe out earnings for the whole year.

“It’s going to be a significant impact in terms of revenue, for example in African parks such as in South Africa, Namibia, Kenya, which are heavily dependent on tourism,” Singh explains. “And this is not only about rangers, but also the people living around the park — the guides, safari lodge workers, souvenir shop owners. For example, in India, tigers create their own economy. If you remove tigers from those towns, there won’t be any people living there anymore.”

Maintaining — or ideally, increasing — ranger numbers will be critical to ensure that parks and valuable species are adequately protected.

“We already do not have adequate numbers of rangers in many parks,” Singh says. “And if you start cutting those ranger numbers, it’s going to have an impact. We have to make sure that whatever is being taken away from rangers during this crisis is not permanent, but is a temporary measure.”

Stopping Zoonotic Disease at the Source

But amid the uncertainty and fear, there are hopeful stories, too.

“One positive thing coming out of this crisis is it shows the interdependence between rangers and communities living around the parks,” Singh says. In Brazil, rangers are distributing rations to remote villages that rarely hear from government agencies. In India, 11,000 rangers in Rajastan province have donated one day of their salaries to COVID relief for local communities. 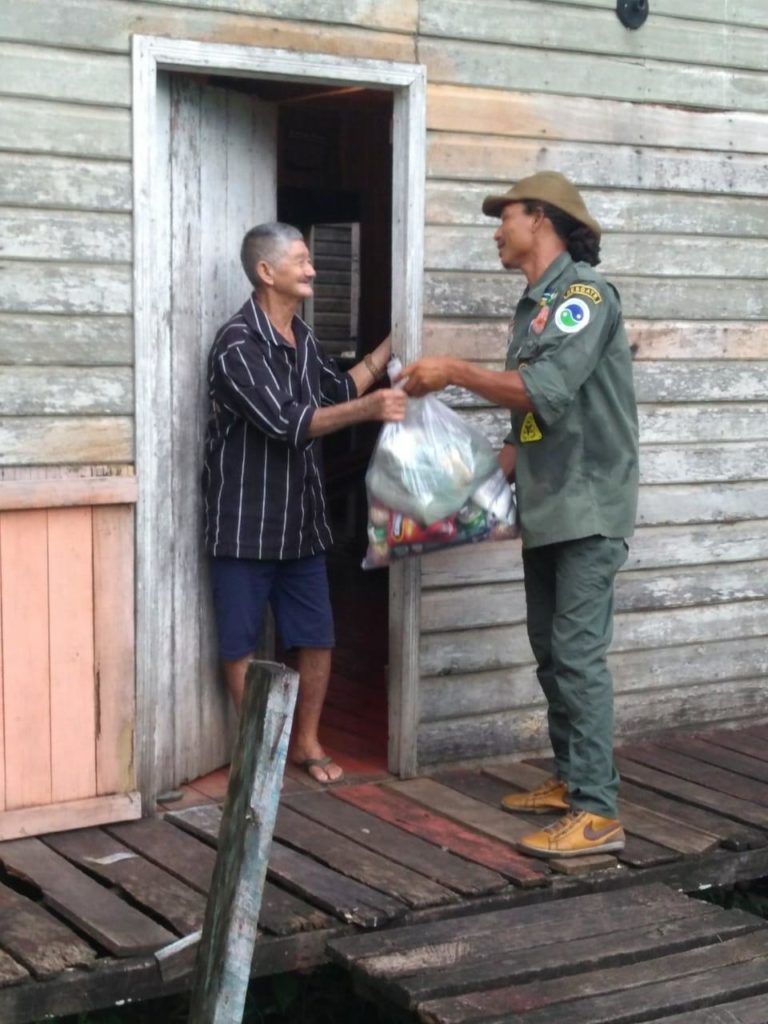 “Conversely, communities are also supporting the rangers,” Singh continues. “In Bhutan, where rangers are now patrolling the border 24/7, communities are coming out and bringing them food.”

No matter what the coming weeks and months may bring, supporting rangers is critical — not only to help them prevent species from vanishing, but to protect us all.

“These men and women are essential workers because they are protecting our life-support system, the Earth,” Slade says. “If we’re not looking after them and considering them in the same vein, then what could happen when we end up with another zoonotic disease that could have been avoided?”

Singh agrees that rangers often don’t get the recognition they deserve for their crucial role in fighting the illegal wildlife trade and — among other things — minimizing the chance of zoonotic disease transmission from wildlife to humans. “Yes, we should use this opportunity to put pressure on the authorities to shut down the high-risk wildlife markets,” Singh says. “But we shouldn’t forget that the rangers are working tirelessly to stop this trade at the source, in the wild. And I feel that in this narrative, that part has been lost.”

The coronavirus may seem all encompassing, but when it eventually recedes, ongoing issues like poaching and the extinction crisis will remain. In Slade’s words, “We can’t let something like this allow us to let down our guard.”