My first encounter with the Critically Endangered Preuss’s Red Colobus monkeys occurred while visiting Cameroon’s Ebo forest. I discovered a group of the monkeys chattering away, lounging in the trees. They were hard to miss with their bright orangish-burgundy hair. During this visit and future encounters with the species, I noticed that unlike other monkeys in the area, who flee from any perceived threats, red colobus monkeys hide in the trees. And they don’t do a very good job at that, making them especially vulnerable to hunters.

Human population growth, hunting, and habitat destruction have pushed Preuss’s Red Colobus Monkeys into just two relatively small forest blocks: the Ebo-Makombe-Ndokbou in Cameroon, and the Korup-Oban, which spans the border between Cameroon and Nigeria. And although Cameroon wildlife law protects the species, their limited range and low numbers make Preuss’s Red Colobus the most threatened monkey species in Cameroon. Few people, however, know about these monkeys, and we know nearly nothing about their behavior. 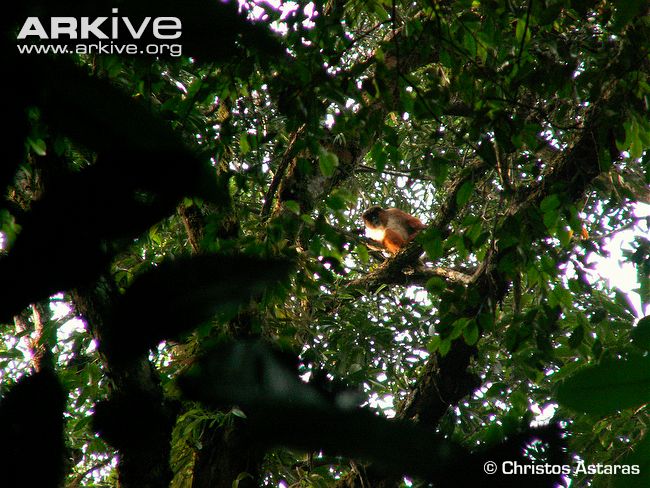 The plight of Preuss’s Red Colobus Monkeys is indicative of red colobus monkeys more generally. Of the 19 species and subspecies of red colobus across the continent of Africa, more than two thirds are considered Endangered or Critically Endangered by the IUCN Red List of Threatened Species. The primary threats are hunting and the loss and alteration of habitat loss from development and agricultural expansion. One species, Miss Waldron’s Red Colobus, is considered lost and may already be extinct. Red colobus hold the dubious honor of being Africa’s most threatened group of primates.

A Plan for Preuss’s Red Colobus

Efforts to conserve the Preuss’s Red Colobus in Cameroon have focused on surveys to determine how many animals are left, assessing human threats to the animals, and educational outreach to people living adjacent to the monkey’s habitat. But to truly make a difference, we need to ramp up these localized efforts with national, regional and continental strategies that are coordinated and attract all of the necessary stakeholders, including national governments, research and conservation organizations and universities. 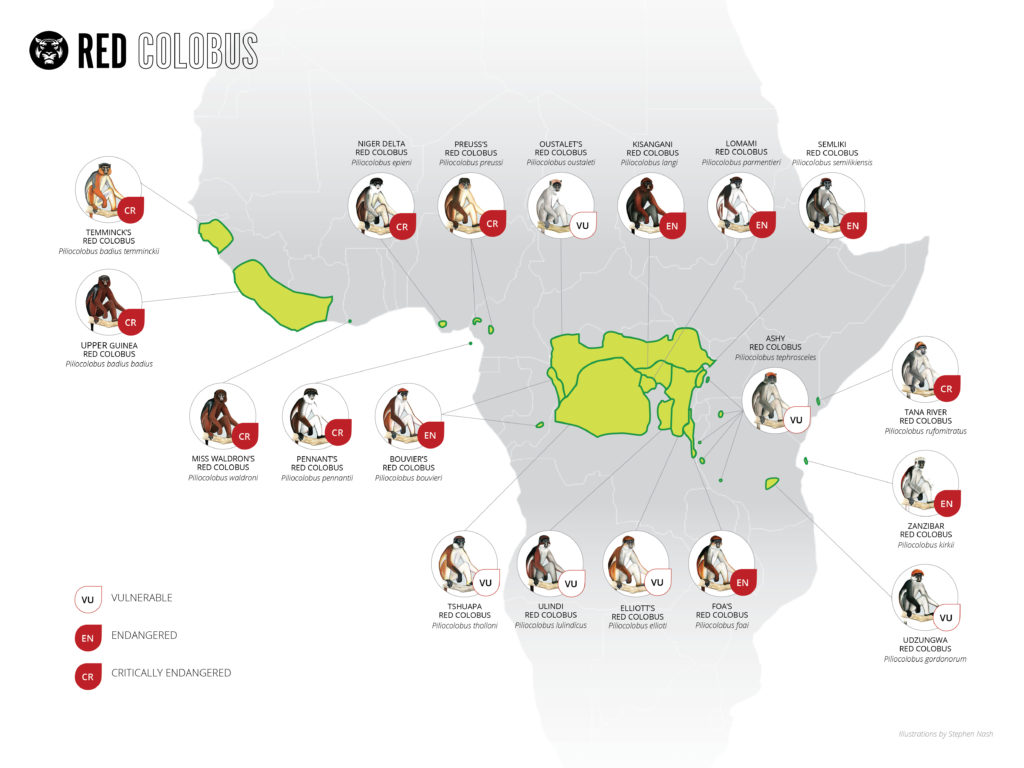 That’s where the ambitious new Red Colobus Conservation Action Plan (ReCAP) comes in. ReCAP launched in August and brings together experts on all 19 red colobus species and subspecies to leverage our collective expertise and influence. A key component of the plan involves identifying 30 priority sites across 20 countries to set up standardized monitoring tools and effective wildlife protection programs and to empower a new generation of African conservation leadership around red colobus.

As primatologists focused on African primates, our goal is to ensure zero extinction of any primate species on the continent. This includes red colobus monkeys, whose range overlaps with more than 75 percent of all primate species on mainland Africa. As large seed dispersers, red colobus play a vital role in maintaining the health of the forests. The African Primatological Society (APS) is a platform to share ideas and information, creating networks and partnerships for the conservation of the rich primate heritage of Africa. The conservation of red colobus monkeys through ReCAP is one of the first major priorities of the nascent APS.

As national and international researchers in countries harboring red colobus, we are all ambassadors to our national governments and local councils for the conservation of the most threatened primate group in Africa. Let us coordinate our efforts across the continent to ensure the successful implementation of the ReCAP and to ensure that our chattering and curious tree-dwelling friends have a bright future.

Ekwoge Abwe is secretary general of the African Primatological Society, an educational and scientific organization that coordinates African primate research and conservation activities locally and internationally.