Few places on the planet are as biologically spectacular as the Annamite mountains on the border of Vietnam and Lao PDR (Laos). These rugged, forest-clad mountains harbor numerous species that are found nowhere else on the planet. Remarkably, several of these species were only recently discovered, including one of the most elusive rabbits on the planet—the Annamite Striped Rabbit (Nesolagus timminsi). This jungle-dwelling rabbit only made its debut to the outside world in 1995 when a British naturalist discovered unusual-looking skins in a local market in Laos. The skins showed a rabbit with small ears, short legs, tiger-like stripes, and a rust-colored rump. Although the skins resembled the Sumatran Striped Rabbit (Nesolagus netcheri), the Lao rabbit was different—different enough, in fact, to be a new species.

And then the story of the Annamite Striped Rabbit largely went silent. After its remarkable discovery there were no follow-up studies on the species to assess its general ecology, distribution, or conservation status. Limited information about the animal makes conservation difficult, especially in the Annamites, which experiences one of the highest levels of poaching of any tropical region. Poaching in the Annamites is done primarily with the setting of indiscriminate wire snares. The level of snaring in the Annamites is difficult to comprehend—even in protected areas, snares blanket the landscape, and it is not uncommon to find dozens, or even hundreds, in a single-day’s walk through the forest. Not surprisingly, this amount of poaching has wiped out many mammals in the Annamites: tigers, elephants, and rhinos are gone, and two animals found nowhere else on the planet, the Saola and Large-antlered Muntjac, are now on the brink of extinction. How was the Annamite Striped Rabbit doing under these conditions? We needed data to find out.

Spying on the Annamite-Striped Rabbit

From 2014 to 2016 our teams conducted a large-scale systematic camera trapping survey across five areas in central Vietnam and adjacent areas of Laos. Our work resulted in hundreds of photos of Annamite Striped Rabbits—the largest dataset on the species ever collected—and provides the first glimpse into the world of this newly discovered and secretive species. We present our findings in a new study published in the conservation journal Oryx. 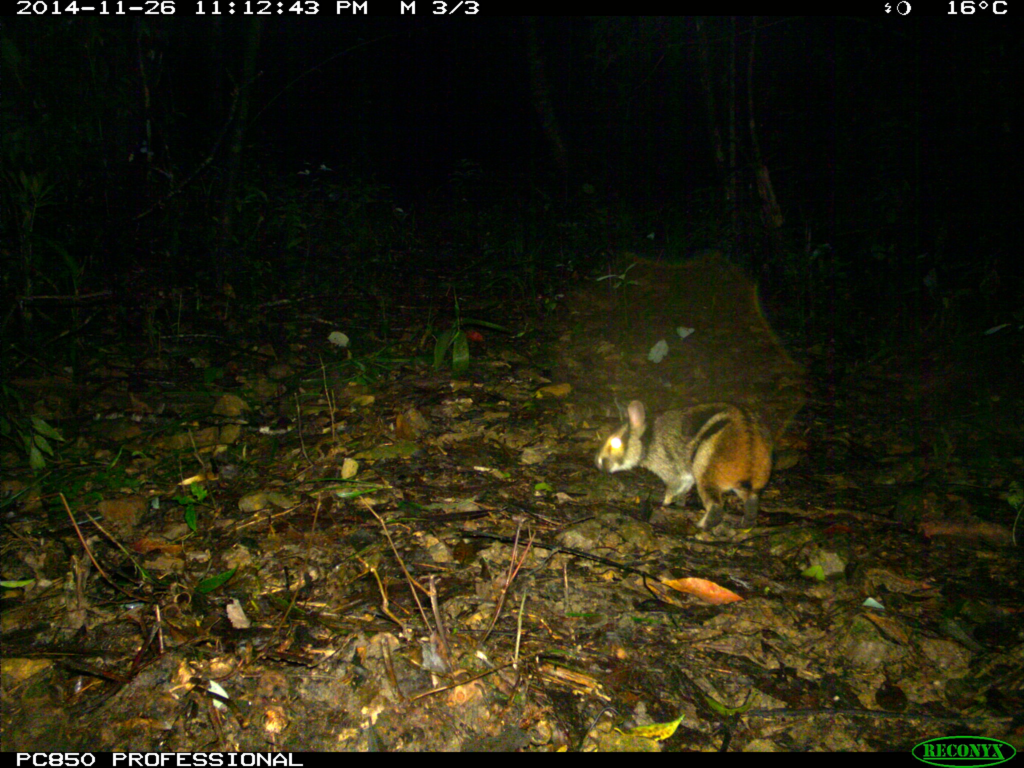 We first tackled some basic questions: Where is the striped rabbit found in our study sites and how does it behave? We found that the striped rabbit, like many other rabbit species, is nocturnal and solitary. It didn’t seem to prefer a specific elevation—we found it from sea-level to mist-shrouded mountaintops. Next, we sought to answer a more complex and interesting question: Why does the species occur where we found it? To answer this question, we tested potential factors that would influence where it lives.

To our surprise, we found that none of the habitat-related factors, including several measures of forest quality, were important. The only factor that drive where the rabbit was found in our study areas seemed to be related to hunting. Past and current hunting pressure, and not habitat conditions, is the primary factor influencing rabbit distribution. And our data suggests that, although the rabbit still occurs in several areas across our study sites, poaching has greatly reduced its populations. For example, our surveys suggest that the species is no longer found in the core area of Bach Ma National Park, our first study site. Although Bach Ma National Park is one of Vietnam’s most esteemed protected areas, like almost all national parks in Vietnam, poaching is rampant. Such levels of uncontrolled poaching have almost certainly wiped out the Saola from the national park, and our data suggest that, without urgent measures to stop illegal hunting, the Annamite Striped Rabbit could be next.

Our results show that the Annamite Striped Rabbit is probably in more trouble than many people in the conservation community—even scientists working in the Annamites—realize. But there are reasons to be hopeful. The fact that the species still exists in detectable numbers in areas that have experienced such intensive snaring indicates that we still have time before the species reaches Saola-like levels of rarity. If we can get snaring under control, the striped rabbit populations in these protected areas can rebound. 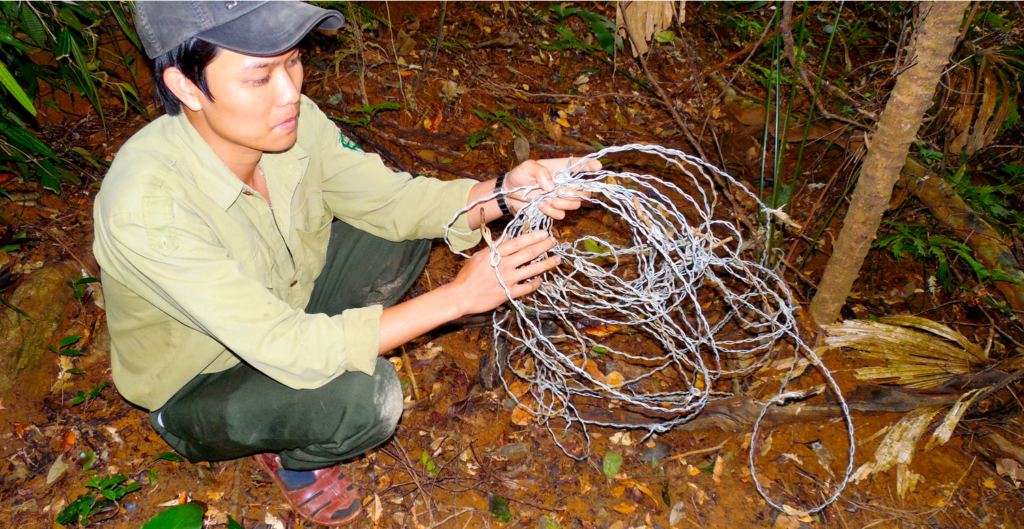 Perhaps the most surprising—and uplifting—result from our survey was the fact that we recorded striped rabbits in a currently unprotected forested area in Laos called the Palé area. The forests of Palé appear to have suffered less poaching pressure than neighboring areas of Vietnam. The area is a rare refuge for the Annamite Striped Rabbit and a host of other threatened species, including two other species found only in the Annamites, the Annamite Dark Muntjac and the Owston’s Civet. If we can protect the Palé area, we can protect what makes the Annamites so special.

Conservation for a Rabbit Rebound

The story of the Annamite Striped Rabbit is still unfolding and the most crucial parts are yet to come. To save the striped rabbit we need to link science with on-the-ground action. The data we collected in our surveys provide specific locations for intensive snare-removal efforts. Additionally, this work establishes the first conservation baseline for the species in our study sites. In future years we can assess how the rabbit’s population grows or shrinks.  It is our hope that, with continued anti-poaching patrols in the Hue and Quang Nam Saola Nature Reserves led by WWF-Vietnam and local counterparts, rabbit populations will recover, and that we can measure this progress. But working in a single landscape won’t be enough to save the species. This is one reason that GWC—in partnership with Leibniz Institute for Zoo and Wildlife Research, Save Vietnam’s Wildlife, and Fauna and Flora International—have begun anti-poaching patrols and systematic camera trapping surveys in another Annamite Striped Rabbit hotspot: Pu Mat National Park. 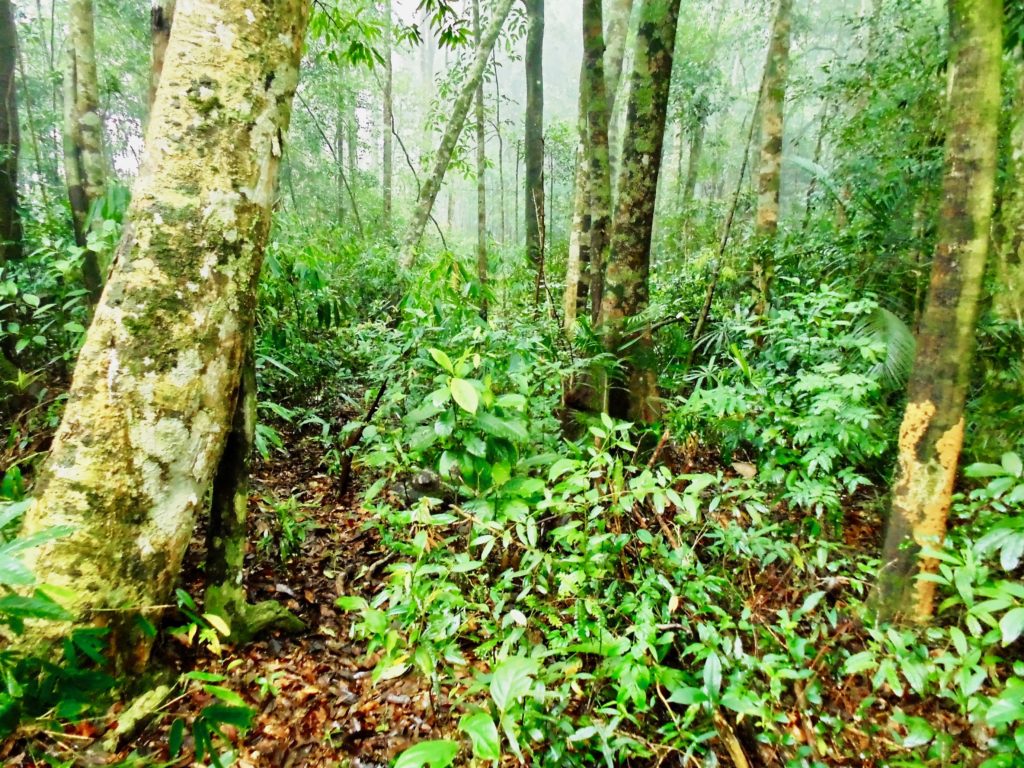 Fortunately, the Annamite mountains haven’t lost their stripes. But to save this spectacular rabbit we need to work together and to act fast.