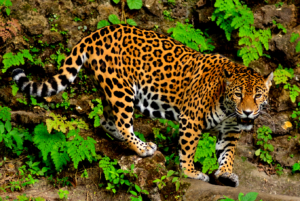 Honduras’s Moskitia region is a place of legend, the site of the recently uncovered ancient city—the White City—and one of the planet’s last strongholds for an incredible diversity of wildlife. Yesterday, Nov. 8, Honduran President Juan Orlando Hernández and the minister of the Institute of Forest Conservation (ICF) Director Arnaldo Bueso announced the government’s commitment to protecting the Moskitia and its people with an initiative called SOS Honduras: Stop the Destruction of the Forest.

“The Moskitia is Central America’s second largest rainforest, one of the last wild places in the region, and contains expansive areas of primary forest that are critical to both wildlife and to the cultural survival of the region’s indigenous peoples,” said Chris Jordan, Central America and Tropical Andes coordinator for GWC. “Putting a stop to deforestation in the Moskitia will change the course of history for Honduras.”

According to recent research by WCS, over the past 15 years, the Moskitia has faced a number of threats that have resulted in the destruction of 30 percent of the region’s forests. The primary threats have included illegal land-grabbing by cattle ranchers, wildlife trafficking, organized crime and looting of archeological artifacts. Ninety percent of the deforestation that has taken place in the rainforest is the result of illegal livestock.

“We applaud President Hernández and the Honduran government for having the vision, leadership, and conviction to rescue the Moskitia from these severe threats,” said Jeremy Radachowsky, director of Mesoamerica and the Western Caribbean for WCS, at the launching event. “These heroic efforts will not just benefit Honduras, but all life on Earth.”

The Honduran president this week announced its commitment to putting an end to the destruction of the forest by vowing to remove all livestock and evict cattle ranchers from the core area of the Moskitia, the Río Plátano Biosphere Reserve. The SOS Honduras initiative will include immediate field operations to re-claim critical areas of the reserve, as well as long-term actions such as hiring and training 100 new park guards and establishing permanent control posts in the region. Without this new presidential initiative, the Moskitia could be cut in half in less than five years, putting wildlife species and indigenous communities and their livelihoods at risk.

“As a state, we have taken actions to protect Río Plátano, but the problem is so serious and delicate that it is necessary to redouble efforts to guarantee that it remains one of the most important protected areas of Honduras and at the same time a UNESCO World Heritage site,” said a statement from the ICF.

The Moskitia is one of the five largest forests in Mesoamerica at 2.1 million hectares. It is a safe haven for a number of wildlife species, including the endangered Baird’s tapir, giant anteater, harpy eagle, jaguar, spider monkey and the national bird, the scarlet macaw. The diversity and uniqueness of wildlife in the Río Plátano Biosphere Reserve has earned it the designation of a Key Biodiversity Area, a place considered critical to the health of the planet.

UNESCO designated the Moskitia a World Heritage site in 1980. The rainforest includes a number of indigenous territories: those of the Miskitos, Pech, Tawahkas and Afro-Honduran Garífunas. In addition to its biodiversity, as an intact, primary forest, the Moskitia has a large carbon-storing capacity and plays an important role in the mitigation of climate change. According to Jordan, only by protecting the world’s wildest and most intact places like the Moskitia can we address the biodiversity and climate change crises and ensure the preservation of the planet’s invaluable cultural and natural heritage.

“President Hernandez’s announcement to rescue the Moskitia forest is groundbreaking,” Radachowsky said at the launch of the initiative. “However, we now all have to come together to support the Honduran government in this noble effort for the benefit of Honduras and the world.”

Steve Elkins, explorer and leader of the Ciudad Blanca expeditions

“Rainforests like the Moskitia contain billions of years of biological knowledge of which we only understand a small amount. It is like a giant book of which we can only read the first few pages. Who knows what wonders nature can teach us that may very well help us solve some of our most vexing problems. It would be insanity to destroy the book before we can read it. Honduras has taken a bold step in the right direction not only for its own survival but also for the world.”

Photo: The Moskitia is a safe haven for the jaguar, a species that is considered near threatened by the IUCN Red List of Threatened Species. (Photo by Julie Maher/WCS)

MISSION: WCS saves wildlife and wild places worldwide through science, conservation action, education, and inspiring people to value nature. To achieve our mission, WCS, based at the Bronx Zoo, harnesses the power of its Global Conservation Program in nearly 60 nations and in all the world’s oceans and its five wildlife parks in New York City, visited by 4 million people annually. WCS combines its expertise in the field, zoos, and aquarium to achieve its conservation mission. Visit: http://newsroom.wcs.org/ Follow: @WCSNewsroom. For more information: 347-840-1242.