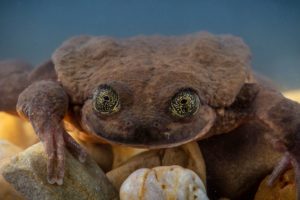 It has been more than 10 years since the last-known Sehuencas water frog, Romeo, has known love—but the bachelor’s luck is about to change drastically. On a recent expedition to a Bolivian cloud forest, Global Wildlife Conservation and the Museo de Historia Natural Alcide d’Orbigny rediscovered the Sehuencas water frog (Telmatobius yuracare) in the wild and rescued five individuals for a conservation breeding program, three males and two females—a young frog and a Juliet for Romeo.

“It is an incredible feeling to know that thanks to everyone who believes in true love and donated for Valentine’s Day last year, we have already found a mate for Romeo and can establish a conservation breeding program with more than a single pair,” said Teresa Camacho Badani, the museum’s chief of herpetology and the expedition leader. “Now the real work begins—we know how to successfully care for this species in captivity, but now we will learn about its reproduction, while also getting back into the field to better understand if any more frogs may be left and if so, how many, where they are, and more about the threats they face. With this knowledge we can develop strategies to mitigate the threats to the species’ habitat, while working on a long-term plan to return Romeo’s future babies to their wild home, preventing the extinction of the Sehuencas water frog.”

These are the first Sehuencas water frogs that biologists have seen in the wild in a decade, though over the years (including in 2018) scientists had searched this area for the species with no success. This team, which had done careful analysis ahead of time to determine the best places to look for the frogs, still didn’t encounter the Sehuencas water frog until after failing for a few long days to find any frogs of any species in what seemed like perfect amphibian habitat—a well-protected stream in the Bolivian wilderness. (Read Camacho Badani’s account of the rediscovery)

The Sehuencas water frogs they eventually did find will be the founders of a conservation breeding program at the museum’s K’ayra Center for Research and Conservation of Threatened Amphibians of Bolivia as part of a broader initiative to bring this species back from the brink of extinction.

The expedition team—which included Camacho Badani; veterinarian Ricardo Zurita Urgarte; Sophia Barrón Lavayen, the head of conservation breeding for the K’ayra Center; and researcher Stephane Knoll—carefully transported all five frogs to the breeding facility, where the animals are in quarantine as they acclimate to an environment that replicates the conditions in the wild. They will also be treated for the deadly infectious disease, chytridiomycosis, which is partly responsible for the steep decline of this species and other amphibians in streams where they were once found. Then Romeo will meet his Juliet.

“There is always risk in bringing animals in from the wild to build an insurance population, and it isn’t a step that should be taken lightly,” said Chris Jordan, GWC’s Central America and Tropical Andes coordinator. “But at this point it seems there are too few water frogs in the wild for them to retain a viable population over the long-term, so there’s a greater risk if we don’t do anything. We have a real chance to save the Sehuencas water frog—restoring a unique part of the diversity of life that is the foundation of Bolivia’s forests, and generating important information on how to restore similar species also at grave risk of extinction.”

The expedition team plans to continue to look for frogs through March to determine if the species lives in the wild in any other locations and in what numbers, learn more about its habitat preferences and continue testing for the presence of chytridiomycosis and other threats in the area. What they learn in the field will help them to develop a plan for protecting and restoring the species’ habitat, both for any amphibians that still live there and to prepare the streams for the return of Romeo’s offspring. The ultimate aim with the conservation breeding program is to breed the animals and return the offspring to their natural habitat when the threats to the species have been mitigated. (Read this FAQ for more info)

Conservation breeding and reintroduction programs have worked for other species in this precarious position, including the Mallorcan midwife toad in Spain—at least 10 populations of this species have been successfully reintroduced to the wild. In Tanzania, the Kihansi spray toad—classified as extinct in the wild by the IUCN Red List of Threatened Species—has been successfully bred at zoos in the United States and is part of soft releases and a program for full reintroduction.

Bolivia has the 10th highest level of amphibian diversity in the world, but 22 percent of those species face some degree of extinction threat. This includes 10 of the 14 water frogs—including the Sehuencas water frog—in the country. Amphibians have declined precipitously as the result of chytridiomycosis, habitat destruction, the introduction of exotic species (such as trout that eat frog eggs), pollution and climate change. In the coming months, the expedition team will also be on the search for two other water frog species that have not been seen for many years in the wild—Telmatobius sibiricus and Telmatobius edaphonastes.

Romeo became an international celebrity on Valentine’s Day in 2018 with a dating profile on Match, the world’s largest dating company. Now he is a powerful flagship for conservation in Bolivia. These expeditions were made possible by the individuals in more than 32 countries who made donations last year that were matched by Match for a total of $25,000.

“Our entire Match community rallied behind Romeo and his search for love last year,” said Hesam Hosseini, CEO of Match. “We’re thrilled with this outcome for Romeo and his species. He now joins the list of millions of ‘members’ who have found meaningful relationships on Match.”

Romeo’s followers can continue to cheer on him and his species by making a donation to support these conservation efforts. They can also stay up to date on these expeditions and other news about the most eligible bachelor through GWC’s blog, mailing list and social media platforms (Facebook, Twitter and Instagram) and the Alcide d’Orbigny Natural History Museum’s Facebook page. Romeo has also now taken to Twitter to share his thoughts on dating, love and romance.

Biologists collected Romeo 10 years ago knowing that the Sehuencas water frog, like other amphibians in Bolivia, was in trouble. They didn’t know, however, that they wouldn’t be able to find any other Sehuencas Water Frogs for a conservation breeding center until now. Romeo currently lives in an aquarium at the K’ayra Center of the Museo de Historia Natural Alcide d’Orbigny in Cochabamba City, Bolivia.

The Sehuencas water frog is a fully aquatic frog that was once abundant on the bottom of small streams or rivers, and in ponds in montane cloud forest of Bolivia. A combination of climate change, habitat destruction, pollution, the deadly chytrid amphibian pathogen, and the introduction of invasive trout has resulted in precipitous declines of water frog species in Bolivia, Ecuador and Peru.

We care about life by supporting wildlife conservation projects, working along with local communities and communicating our scientific knowledge. Thus, to raise awareness of wildlife importance for human development. Learn more at http://www.museodorbigny.org