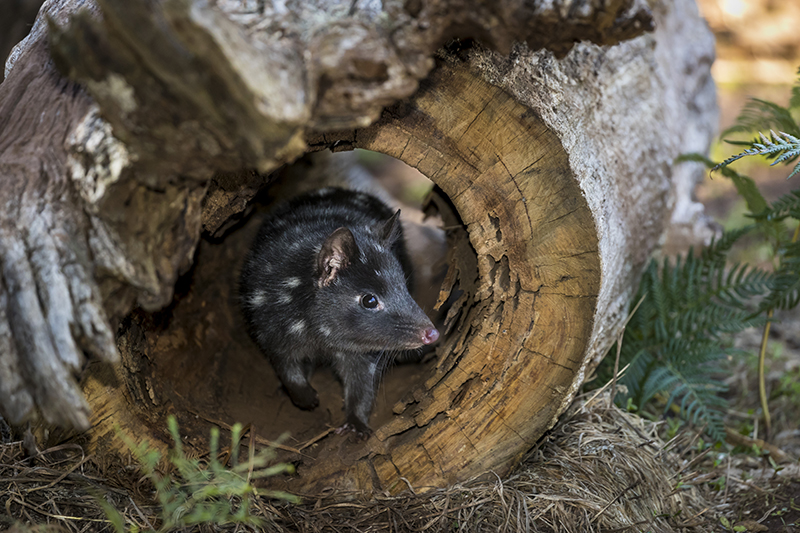 They may not look it with their moist pink noses, spotted coat and small stature, but as carnivorous marsupials, Australia’s eastern quolls are relatives of the Tasmanian tiger, a legendary animal that went extinct in the 1930s.

In an effort to prevent the quoll—and those species that depend on it for a healthy ecosystem—from going the way of the thylacine, Aussie Ark, Global Wildlife Conservation and partners have released a group of captive-bred quolls into the wilds of Australia’s Booderee National Park as part of a recently established conservation breeding and reintroduction program. Although quolls live in Tasmania, they went extinct on mainland Australia in the 1960s.

“This is an historic moment for this wonderfully charismatic species and an important step in our efforts to restore balance to Australia’s ecosystems,” said Tim Faulkner, Aussie Ark president. “While this release is a trial to see if the management practices we’ve developed for captive-bred quoll can, indeed, ensure their survival in the wild, we are hopeful that this is the start of an annual release program at Booderee that will ultimately help bring this species and others back from the brink.”

The eastern quoll is one of four quoll species in Australia, all of which are classified as either endangered or critically endangered on the IUCN Red List of Threatened Species. Habitat destruction and the introduction of non-native species, such as foxes and cats, have decimated their populations.

Although invasive predators are still a problem in Australia, Booderee National Park has a long-standing fox management program. The first and only other release of eastern quolls on mainland Australia was also at this park, in 2018. While that was not an Aussie Ark-affiliated release, those animals went on to successfully breed, spurring hope for the new wild residents.

The 17 individuals released this year are part of Aussie Ark’s conservation breeding program, which bred captive quolls for the first time in 2017. Aussie Ark prepares the animals for release by keeping them in a wild-like setting and emulating the feeding conditions the nocturnal animals prefer in the wild. They also fit the individuals with radio transmitters so partner Rewilding Australia can track their progress in the wild.

There are a remaining 52 eastern quolls at Aussie Ark’s facility in northern New South Wales, some of which will be released later this year into fenced sanctuaries in the Barrington Tops, marking the first time quolls have lived in the World Heritage Area in more than 100 years.

“Aussie Ark’s approach to rewilding Australia is simple but could be revolutionary,” said Don Church, GWC’s president. “The eastern quoll is one of seven keystone species they’ve identified as critical to restoring to the wild not only for this species’ benefit, but to fix a damaged ecosystem. We’re proud to support these efforts and look forward to celebrating all of the successes we know are sure to come.”

Australia harbors the only living carnivorous marsupials on the planet, including the eastern quoll, which eats insects and pests such as mice and rats, helping to keep populations under control that would otherwise upset the natural balance in the ecosystem. The country, however, has the highest rate of mammalian extinctions on Earth—at least 10 percent of its mammal species have gone extinct since European colonization. GWC and Aussie Ark are also working to return to the wild Tasmanian devils, brush tail rock wallabies, rufous bettong, eastern quoll, long-nosed potoroo, parma wallabies and southern brown bandicoots, each of which will help Australian ecosystems recover.

“As we figure out globally how to stem the overwhelming tide of biodiversity loss, it is clear that Australia has a profound role to play in addressing this challenge,” Church said. “Through its incredible animal care, expertise and ambitious goals, we are comforted that Aussie Ark is helping lead the way.”

As a not for profit organisation, Aussie Ark raises the necessary funds to continue its ambitious vision. Investment allows for the construction of captive facilities and predator proof fencing on semi-wild parcels of land. Aussie Ark is a registered environmental organisation and charitable institution under the Australian Charity and Not-for-Profit Commission. Aussie Ark has deductible gift recipient status (DGR status) and is registered for GST purposes. More information at aussieark.org.au