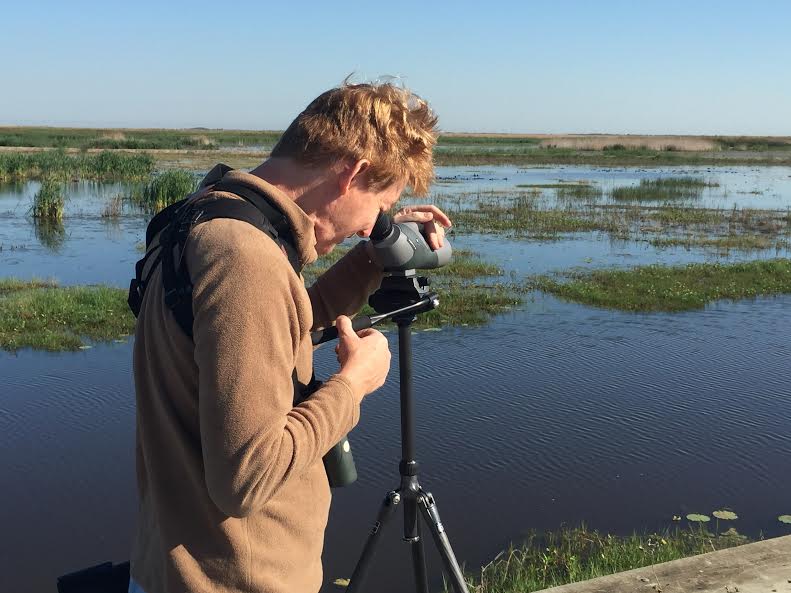 John Weigel looks through a telescope at waders in coastal Texas in early April.

A little more than six months into the American Birding Association’s (ABA) Big Year for Birding, all-star birder John Weigel is only four bird species away from beating the record for most birds found in North America in a single year. But Weigel’s efforts are not just about the birds—his Big Year is about re-connecting with his home country, while raising awareness about the Tasmanian devil, a species he’s trying to prevent from vanishing in his adopted country of Australia.

“It has been wonderful to use the excuse of birding to explore unimaginably beautiful areas of North America in a wide range of states, from Florida to California to Alaska, in search of rare birds,” Weigel said. “I set out to explore and now this has turned into the ride of my life. Even if I don’t end up breaking the record, if more people hear about the Tasmanian devil through my efforts, this ride will be well worth it.”

In the last six months, Weigel’s Big Year strategy has focused on finding birds that the ABA considers rare. As of July 11, Weigel has counted 89 rare species and 746 total species. He’s even recorded two species that may not have been seen before in North America—the Cuban vireo and pine flycatcher—and awaits ABA classification. Massachusetts birder Neil Hayward holds the Big Year record to date at 749 in 2013. Weigel broke the Big Year record for Australia in 2012.

So far Weigel has been to 20 states and two Canadian provinces. He found the most rare species (19) in Alaska, where he ventured to the westernmost island, Attu Island. He attributes his success so far to the El Niño conditions that have resulted in an influx of rare birds. For the rest of the year, Weigel will be racing time, the elements and a small group of other dedicated Big Year birders also out to beat the record. Weigel is tracking his efforts on his Birding for Devils blog, where he is sharing his list, while GWC checks up on his progress in an interview.

Weigel is founder and managing director of Devil Ark, a GWC priority project and the largest, most successful breeding program for the Endangered Tasmanian devil. Once widespread in Australia, Tasmanian devils have been nearly wiped out by one of the only cancers known to spread as a contagious disease, called Devil facial tumor disease. The devils are now extinct on mainland Australia. In Tasmania, their numbers in the wild have plummeted to less than 10 percent of historic population size—just 25,000 devils persist today. Devil Ark, based in the Barrington Tops hills of southeastern Australia, is building an insurance population of Tasmanian devils to release back into the wild.

“Devil Ark is the last best hope for the iconic Tasmanian devil, who plays a crucial role in keeping cats and foxes at bay and reduces predation by these invasive predators on birds and marsupials, including several endangered species,” said GWC President and Director of Conservation Don Church. “This is a unique conservation effort for the fact that the solution is clear-cut—keep the Tasmanian devil alive in captivity and wait for the disease to burn out or researchers to find a cure. Birding for Devils is yet another testament to John’s incredible commitment to saving Taz.”

Today Devil Ark is home to 150 Tasmanian devils and aims to expand to 360 to ensure a viable population. Individuals interested in supporting Birding for Devils and these efforts for to save the species can make a donation here.

Photo: John Weigel looks through a telescope at waders in coastal Texas in early April.

Devil Ark is a not for profit organisation and registered charity. Dedicated in ensuring the survival of the endangered Tasmanian devil at risk of extinction due to Devil Facial Tumour Disease (DFTD). Devil Ark plays a critical role in managing an insurance population of the Tasmanian devil. Devil Ark’s facility was built in 2010 with only 44 founder devils. Over the past six years, we have grown to 150 adult devils and produced over 200 joeys/babies, a number of which have been returned to the wild in 2015. We are committed to increasing the population to 360 devils by 2020. Extinction is NOT an option. Learn more at http://www.devilark.org.au/