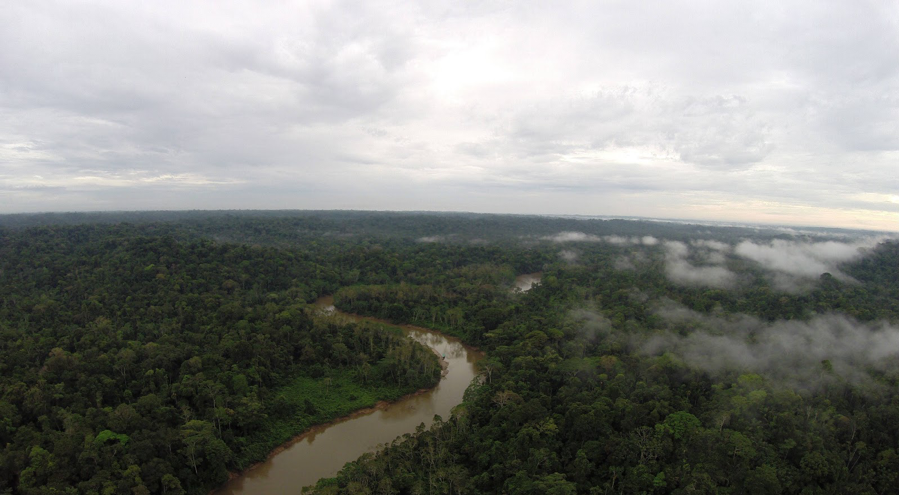 Photos and spokespeople available upon request

Coca, Ecuador--Today, Ecuador’s national and Amazon-region Indigenous federations— with support from COICA, the coordinating body of Indigenous organizations across the nine-country Amazon basin, Amazon Frontlines, and a coalition of regional and international human rights organizations— launched a global campaign and filed legal actions to demand the suspension of the flow of crude oil through Ecuador's major pipelines.

The country’s SOTE and OCP pipelines ruptured on April 7 of this year as a result of negligence in addressing forewarned headward erosion on the Coca and Napo rivers. Backed by human rights organizations, Indigenous communities affected by the resulting oil spill immediately filed a lawsuit asking for clean up, redress, and an end to oil company impunity. However, the court case has been indefinitely suspended since June. Aggressive erosion and massive landslides are threatening an imminent second oil spill, which would again impact thousands of Indigenous peoples and contaminate rivers flowing into Peru and Brazil.

Kichwa communities along the spill zone escalated their case today by filing dozens of lawsuits demanding court-ordered injunctions to immediately shutdown the oil pipelines until justice is served and safety is restored. There could be as many as 100 community members appearing at the court to file individual cases.

Since the beginning of the COVID-19 pandemic, Indigenous peoples have called for the suspension of all resource extraction in the Amazon. A suspension of the SOTE and OCP pipelines would equate to a suspension of all oil production in Ecuador at a time of heightened risk to Indigenous peoples living along the pipeline, who are dually threatened by a global pandemic and oil contamination. These pipelines pump all of the country's oil, which is then shipped to international markets (half of which goes to refineries in California and Washington).

Ongoing resource extraction has accelerated the spread of COVID-19 in the world’s most biodiverse tropical rainforest. According to the Pan-American Health Organization, the virus has infected at least 20,000 people in Indigenous communities of the Amazon. Indigenous peoples are the first line of defense for the Amazon rainforest, the “Lungs of the Earth”. At the first World Assembly for the Amazon in July, Indigenous organizations from Brazil, Bolivia, Peru, Ecuador, Colombia, Venezuela, Guyana, French Guyana and Suriname called for a moratorium on extractive activities to confront toxic contamination, raging fires, loss of territory and biodiversity, climate change, and, now, infection.

Around the world, indigenous peoples are launching unprecedented legal and political battles to guard their rights and territories. Pipelines and oil extraction are being challenged like never before with increasingly sophisticated tactics. This campaign builds upon recent Indigenous-led victories against the fossil fuel industry, such as the Standing Rock Sioux victory against the Dakota Access Pipeline and the Waorani’s landmark legal victory, which protected half-a-million acres of Amazon rainforest from oil drilling last year.

"Oil spills and poison in our rivers are caused by corporations that plunder and line their pockets and governments that promote the exploitation of resources in the Amazon Basin. When our Indigenous brothers and sisters are threatened for these reasons, we are all threatened. And we will all unite to fight. The spill that occurred on April 7 on the banks of the Napo and Coca rivers is a clear example, and today 2000 indigenous families are at risk. COICA, an international organization of Indigenous peoples of the Amazon Basin, will not let them fight alone. We are here to fight together for our rights."

“The Amazon is life. Caring for and defending it is our obligation. The Ecuadorian Indigenous Movement is gaining momentum and uniting with our international allies to confront extraction in our territories, starting with the dangerous and unstable SOTE and OCP pipelines.”

"Today, the Kichwa people are sending a message to the government, the oil companies and the Ecuadorian court that we will not remain silent while our lands remain contaminated by oil and threatened by another spill. We are intensifying our call for justice and we will not stop until that justice is served.”

“For too long, oil companies have acted with total impunity in Ecuador. Now, with a global pandemic raging, climate change accelerating, and the survival of thousands of Indigenous peoples at risk, it is imperative that the Ecuadorian court impose an immediate suspension of the country’s oil pipelines to avoid another disaster. It's time to stand with Indigenous peoples, who put their own lives on the line every day to protect our planet's best natural defense against climate change, the Amazon rainforest.”

“In the midst of a global pandemic with root causes tied to the destruction of our planet, the April 7 oil spill in Ecuador threatened thousands of indigenous peoples, wildlife, and ecosystems that are critical for maintaining the health of our planet. This context is a stark reminder that extractive industries are outdated and destructive and that we need a better way forward if our planet--and life on Earth--is to survive. Indigenous peoples around the world are standing up to the destruction of our planet and charting a new course forward that includes a moratorium on extractive activities in the Amazon. It is time for the rest of the planet to stand alongside them, listen to them, and work together for a just, healthy, biodiverse future.”

Amazon Frontlines is a non-profit organization based in Lago Agrio, Ecuador that leverages technology, legal advocacy and movement building to support indigenous peoples to defend their rights to land, life and cultural survival in the Amazon Rainforest. For more information, visit www.amazonfrontlines.org.